Album Review...The Band Whose Name Is A Symbol - Masters of the Molehill (2015) 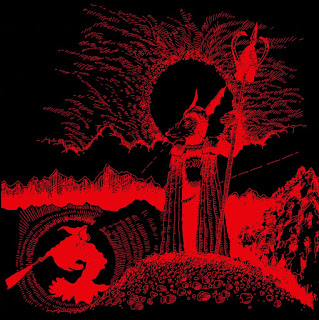 Psych Rockers TBWNIAS are a 6 piece based out of the legendary Birdman Sounds record shop in Ottawa, the group have now released 9 vinyl only LPs in miniscule editions (Private Press and Lathe Cuts) with an underground reputation which has made them a cult among aficionados of hard thudding, rock riffng kraut. The latest release Masters of the Molehill finds them once again in fine form, Underworld kicks off proceedings setting the pace with its solid drums and fuzzy guitar sounds, known for their freeform jams ( demonstrated  by the track "Darkness"), the band take their time getting to where they want to be and you can hear that they enjoy what they're doing as the heavy "Baalslapper"'s hard rocking riff testifies. Everything moves along in heavy style on the stand out track for me  LM onto You Do Wrong where the Can influences really shine through, the band clearly love their Krautrock and this album is brimming full of those fantastic stylings and its own psychedelic fuzzy footprints.  The pace changes again on  GOD II slower at first speeding up with feedback and intensity leading up to the epic 12 minute long atmospheric closer "Ice Rings".

TBWNIAS have a recorded one of the more impressive albums of the year, whilst not as Krautrock obvious as Föllakzoid latest release iii, nor as start to finish intense as Ecstatic Vision's Sonic Praise, theres so much going on here that almost serves as the best of both of those worlds and it's a rewarding listen every time  This is another recommended lp for 2015 in what has been a strong year for HeavyPsych releases. 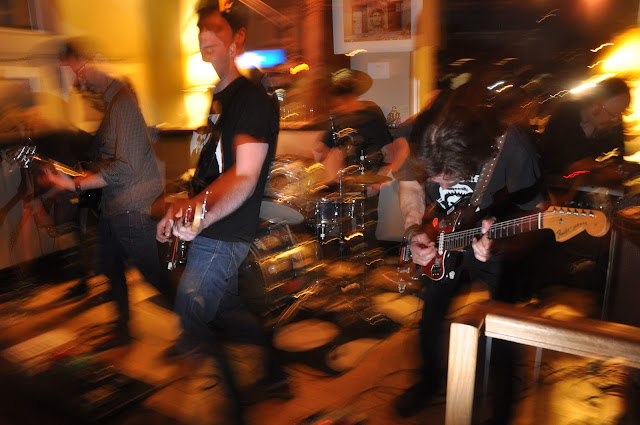 Posted by atom heart mutha at 19:16 No comments: 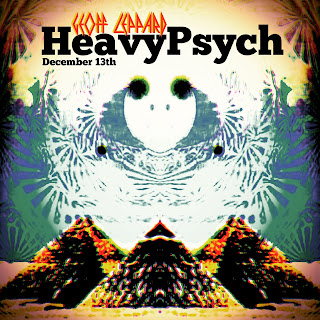 The Next HeavyPsych show will go out on December 13th,In a change to the usual format this will be broadcast on a Sunday on BigJaf.nets Mixlr page as well as on American Radio Station Grip of Delusion. More details will follow soon.

In the meantime there are plenty of past shows to enjoy here on the blog for from my mixcloud page.
Posted by atom heart mutha at 18:46 No comments:

Listen Back to Septembers HeavyPsych Show 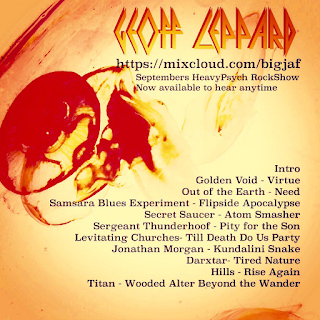 Listen back to Septembers show, a brilliant hour of Music from Jonathan Morgan, Sergeant Thunderhoof, Hills and Darxtar.
This originally went out on BigJaf.net and Grip of Delusion Radio.

Details about Decembers HeavyPsych Show coming soon, if you want to be considered for future shows, contact me . 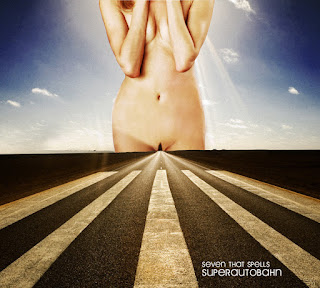 Croatian Psych rockers Seven That Spells album  Superautobahn has been re-released by German Label Sulatron Records on Heavy Black wax and limited to 500 pressed.
Released 3 years ago this monster of an album features only 3 tracks, 3 long, very heavy pounding slabs of beat driven monsters. All of the tracks here follow the same pattern of  fast moving drums accompanied an by ever building noise of guitars that scream along. Opening track  The Wall displays perfectly what's on offer here, a wall of noise, high heavy sonic sounds breaking briefly at its center before pushing on hard, heavy and measured. Second track The Pyramid starts off  with a Jazz sound before very quickly morphing into a rhythmic trance inducing pulse of guitar noise and more driving beats taking its time to move ever forward to its white noise conclusion. However it's album closer The Colossus that stands out, playing at just under 22 minutes it's hard to believe the sheer size of this as the sonic guitar, weird brass and quiet vocals
Pulse hypnotically and noisily on and on  until all that's left is a quiet breeze. There's a clear appreciation for Krautrock here and with the psychedelic rock sound the two marry perfectly, Niko Potocnjak has recorded an engaging and exciting listen not least in part to contributions by Acid Mothers Temple's Kawabata Makoto, This is highly recommended stuff, but grab one on vinyl now, they won't be there much longer. 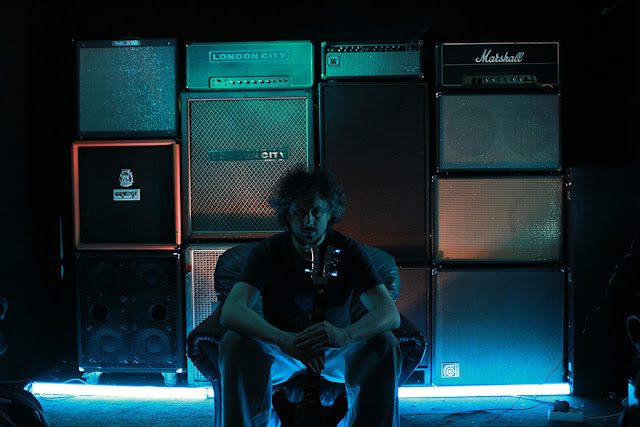 Buy Superautobahn on CD
Posted by atom heart mutha at 18:00 No comments: 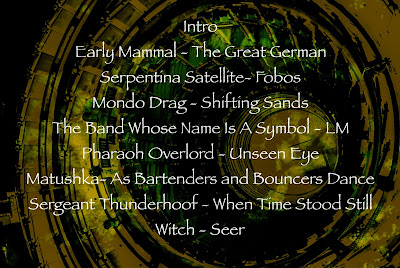 Novembers HeavyPsych Show is now up on Mixcloud  and available to hear anytime.  This months show features new tracks by Early Mammal, TBWNIAS and Sergeant Thunderhoof as well as awesome cuts by Mondo Drag and Serpentina Satellite . Play it Loud and Enjoy.


If you would like your band to be considered for a future show or have your music reviewed, contact me by email or on Twitter for details of where to send your music to.

Posted by atom heart mutha at 13:39 No comments:

Tune in Tonight from 9pm for 60 minutes of fantastic music Live Online as Part of the BigJaf.net RockShow,  The RockShow starts at 8 and features 3hrs of brilliant Rock. Dylan the Wolf will be playing 90's Alternative and grunge from 8pm and Tony Gaskin will be playing 60 minutes of Unsigned and Undiscovered Rock and Metal from 10pm.
The link below will go live from 8pm and you'll be able to hear the entire show Live as it happens.

Tonight i'll playing brand new tracks from Early Mammal, The Band whose Name is a Symbol and Sergeant Thunderhoof.  Be There !!
Don't worry if you miss it this time round, HeavyPsych will also go out on Grip of Delusion Radio tomorrow 10am EST / 4pm CET / 3pm UK

www.bigjaf.net is on Mixlr
Posted by atom heart mutha at 10:44 No comments:

November's HeavyPsych Show is this Weekend. 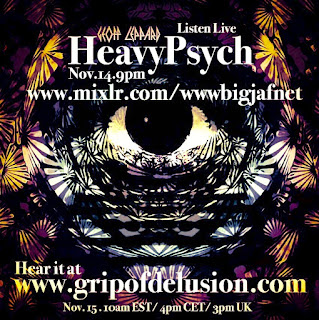 Tune in this weekend to hear Novembers HeavyPsych RockShow, this month features Brand New Tracks from Brand New Albums by Early Mammal, The Band Whose Name Is A Symbol and Sergeant Thunderhoof.  As Always this will go out Live on Saturday from 9pm as part of the BigJaf.net RockShow but you will also be able to catch it this Sunday at 10amEST /4pmCET /3pmUK time on American Radio Station www.gripofdelusion.com.

A link direct to the live stream will be available from Saturday which you'll be able to play as soon as the show goes live.  Be There !
Posted by atom heart mutha at 17:45 No comments:

Listen to Further Transmissions from the Psychedelic Basement Anytime 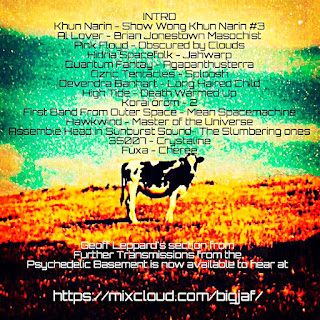 Further Transmissions from the Psychedelic Basement is now available to to hear offline anytime on Mixcloud.  Originally broadcast on Novemebr 7th by Bigjaf.net and November 8th by American Radio Station www.gripofdelusion.com this mix features Old favourites and new Psych Sounds with a Spacerock/Krautrock feel.
Enjoy !

Further Transmissions from the Psychedelic Basement by Bigjafir on Mixcloud
Posted by atom heart mutha at 10:18 No comments:

Turn On, Tune In and Freakout from 8pm Tonight for an all new Broadcast Special


Join Me tonight from 8pm for a special Joint Broadcast with the brilliant minds at Thee Psychedelicatessen.  We will be playing 3 hours of Psychedelic Sounds old and new featuring the very best Psych has to offer. You can expect to hear great music from Goat, High Tide, White Manna, Hidria Spacefolk and so much more.
Check in here from 8pm to listen in, the player below will go live as the broadcast starts.

Check out Thee Psychedelicateseen on their Strange Things Are Happening Blog..HERE


www.bigjaf.net is on Mixlr
Posted by atom heart mutha at 13:02 No comments:

Listen Now to the Original Transmissions from the Psychedelic Basement Until then, you can listen to my section of the last Psychedelic Basement Broadcast by clicking play on the Mixcloud player below
You can hear the new broadcast by checking back tomorrow night and there will be a playable link here on the blog as well on all the usual social network places ( Links to the Right ) .
You can also listen to some of my Past HeavyPsych shows on My Mixcloud page too. Enjoy !

Geoff Leppard Transmissions from the Psychedelic Basement by Bigjafir on Mixcloud

Posted by atom heart mutha at 21:12 No comments:

Further Transmissions from the Psychedelic Basement 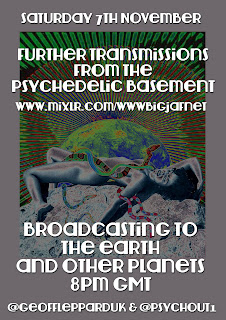 This Weekend !! Further Transmissions from the  Psychedelic Basement, another Joint Broadcast  with the Geniuses at Thee Psychedelicatessen.

Expect to hear some old favourites as well as some newer Psychedelic sounds in 3 hours of Brain Melting Psychedelia, Krautrock Beats and Brain Expanding Proggy SpaceRock Sounds, all live from 8pm On Saturday 7th November.

There will be a link to the show on all of our Social Media, however you can also access it here, the link below will take you direct to the Broadcast and the Show will go live from 8pm on Saturday

So Please Join Us, Turn on, Tune in  and FreakOut !