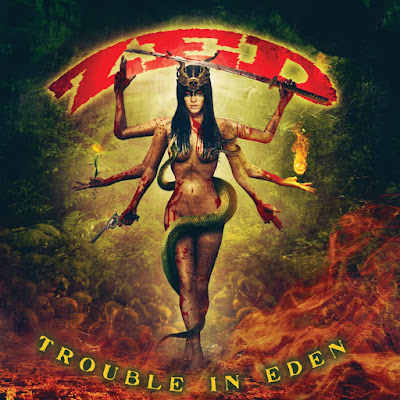 Read this review on Midlands Rocks too !

A week goes by and there's another release from Ripple music with an album cover showcasing a six armed woman (see also Devil to Pay's A Bend through Space and Time) and this ones got a snake!
San Jose's Zed follow up to 2013's self released Desperation Blues has arrived. Trouble in Eden is their 3rd release and its a killer.

'Royale' opens the record with a weighty riff and heavy drum beat, rooted in the very best of heavy Rock 'n' Roll's heritage. The pace and style is maintained with 'Save You From Yourself' and 'The Only True Thing' both showing confidence and skill instrumentally, and vocally. Things slow down and get heavier with 'Today not Tomorrow' and demonstrate splashes of 70's rock, within its contemporary construction. 'Blood of the Fallen' shows off a brilliant stoner groove, whilst still going hard on the guitars and solos.  'High Indeed' builds on that formula and exhibits some of the best drum work on the record.  Standout track 'So Low' follows, taking in influences from the 70's to now, but forging something individual as the track moves towards its crashing conclusion. The album finishes with the mighty stomp of 'The Mountain' weighing in at 7 minutes; its a colossal monster that one can imagine slays the audience when played live.
Ive been lucky enough to live with this record for a few weeks, and the more I've played it the better its been. 2016 has been an interesting year within Psych-rock/Stoner/Desert/Space whatever scene; there's an emergence of artists that I'd love to see break out of where they are now and gain more worldwide exposure;  Zed are one of those bands.

As with pretty much all of label Ripple Musics current output, this is a band that deserve a wider audience and Trouble in Eden offers the band an excellent chance to breakout and grab some well earned attention; this record is great heavy stoner rock music played with confidence, by a band that are getting bigger and better. Absolutely recommended.

Posted by atom heart mutha at 21:18 No comments:

Album Review...Devil to Pay - A Bend Through Space and Time 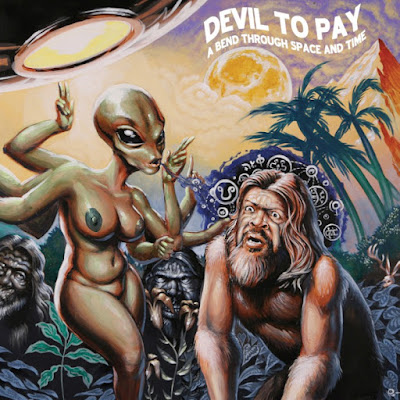 Read this review on The Midlands Rocks website Here!

Devil to Pay are an interesting prospect; they've been around for some 13 years and are the brainchild of Frontman Steve Janiak. Janiak himself is a fascinating guy, having spent some time in a deep drug induced coma; his lyrics are described as being "from the other side". Following the coma and coming from strange hallucinations and flashbacks; there's a deep well of weird shit to draw from, and Devil to Pay definitely get stuck in.

'On and On (in your mind)' kicks things off with a great, fuzzy riff and some rather fantastic drumming.  Theres some cool guitar harmonies too; it's a stomping monster that leads nicely into 'Don't Give the World Away'; more great stoner grooves and a vocal and backing, not unlike earlier Alice in Chains, in places. The next track up is 'Kobold in the Breadbasket' and it's here that you hear more of the AIC influence that lies throughout a lot of the LP; not just in terms of vocal sounds, but in tone and tempo too, working well and not detracting from the sound or identity of the band, themselves.
Elsewhere, there's 'Recommended Daily Dosage' a speedy riffed rock banger, complete with Cowbell and venomous, raspy vocals. Following this, the stomp doom of 'Knuckledragger' all fit in well with pace of the record, grabbing your attention throughout. 'Your Inner Lemmy' is a fantastic tribute to  the late man himself and his band, with more than a passing nod to the distinctive  Motörhead Sound.  The album closes with the magnificent 'The Demons Come Home to Roost'; an epic 8 minute long marathon of heavy riffs and drumming that mixes Heavy Rock and Stoner style with head bounding success.
The LP runs at a decent 44 minutes and doesn't let up from start to end; the lyrics are pretty out there, in places, and are fitting with the sounds, its a great listen.

Label Ripple Music continue to have a decent summer; if you haven't heard the debut album by The Judge, that needs rectifying.  Label mates Zed release their new LP imminently too, and A Bend through Space and Time sits nicely between those two records. The Riffs are heavy and the grooves are tight.  There's something infectious about this album that pays dividends you more you hear it; fans of heavy stoner and desert rock will find plenty to enjoy here, this is the good shit! (fans of six armed aliens and nipples will find the album art interesting too!)
Get on it.

Devil to Pay on Ripple Music

Posted by atom heart mutha at 20:28 No comments: 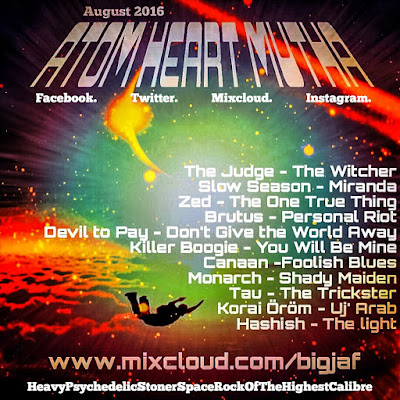 The Atom Heart Mutha RadioShow for August is now available to hear anytime by going to the AHM Mixcloud Page HERE or by clicking the player below.
This month features a wealth of brand new tracks from albums that are about to or have recently been released.

This months tracklist...
The Judge - The Witcher
Slow Season - Miranda
Zed - The One True Thing
Brutus - Personal Riot
Devil to Pay - Don't Give the World Away
Killer Boogie - You Will Be Mine
Canaan -Foolish Blues
Monarch - Shady Maiden
Tau - The Trickster
Korai Öröm - Uj' Arab
Hashish - The light

This months show went out on August 13th on BigJaf.net and encored on American Radio station Grip of Delusion on August 14th.
As always if you like what you hear then please support the artists involved, check out the AHM Facebook page HERE for tags to the artists and labels pages.  Enjoy the show !

Posted by atom heart mutha at 12:15 No comments: 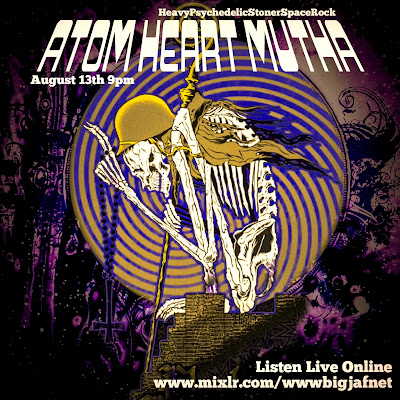 The Next AHM RadioShow goes out Live Online at 9pm (UK Time) on Saturday August 13th as part of the BigJaf.net RockShow.
This month features a ton of brand new tracks from new releases by The Judge, Zed, Devil to Pay, Slow Season, Canaan and so much more.
You can also catch the encore of the show on Sunday 14th on American Radio Station Grip of Delusion.
Until then enjoy a playback of Augusts Show from 2015, back when it was Still called HeavyPsych.

Posted by atom heart mutha at 18:00 No comments: