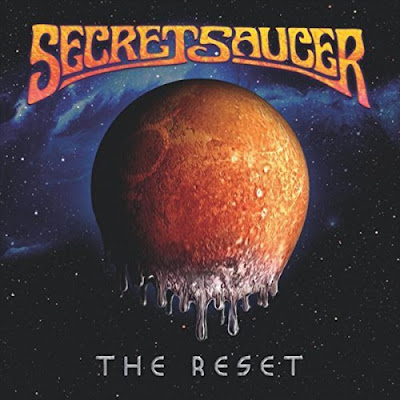 Born from the ashes of the Strange Daze Festival, is an Ohio based Space Rock band known as Secret Saucer.  The music they make is pure, improvisational, spacerock/krautrock and have been melting brains for 12 years, since the release of the debut 'Element 115'.

We liftoff with the synth heavy  intro of 'Mercury' before morphing into 'Roaming Shores' a tripped-out Space Rock opus that unfolds beautifully, over nearly 7 minutes.
'Silver Tethers' is a heavily synth laden track, with a sci-fi feel.  The drumming is reminiscent of Nick Masons's celebrated work on 'Dark Side of the Moon'.  It's easy to get lost in the track as you find yourself getting carried on to higher plains. Follow on track 'We're Waiting' is a pulsating, electronic soundscape that peaks with the sound of (One presumes) alien birds. The title track is a magnificently unnerving, oscillating soundscape, that serves to warn us of "violent quakes' on the earths surface. The next track 'Orbital Perturbation' carries on with the ominous theme, as it builds to to a gravely riff and intergalactic whirling.

Elsewhere, on the record is the looping, bass-driven, space stomp of 'Surfing on Saturn' and the 'Comfortably Numb' influenced 'Treading on Crystal light' that evolves into a cosmogonic space skank, before reverting back to its Floydian sway.  The album highlight for me comes in the closing tracks of the record with 'Beaten Path'; a euphoric composition that takes the album towards concluding piece 'Dripping Metal'.

The Reset is album number 7 for Secret Saucer and it finds them on great form.  The band continue to be driven, and on point.  Within the grooves, you can hear the influence of Nik Turner and Hawkwind, as well as all the hallmarks of any great, modern, SpaceRock record in the cosmic mix. This is a band that deserve a wider audience to absorb the hard work poured into the intergalactic psychedelia that lives within their albums.  The Reset might just be the album to do that.

The band have just announced that a limited edition vinyl run will be released in May via German label PsyKa Records; the album is due to be mastered by the brilliant Eroc.  Preorder now, before it's too late!