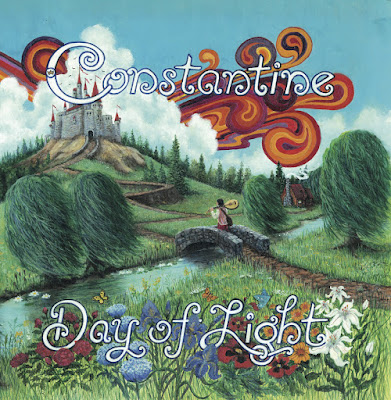 A change of pace for Atom Heart Mutha from the usual sonic sounds of the impenetrable walls of feedback. 'Day of Light' is the new album from Constantine Hastalis, a talented singer songwriter from Chicago.

'(Into The Land) That Time Forgot' opens the album with pastoral folk brushes, moved along by psychedelic surges over an acoustic guitar.  'The Trip (Parts I and II)' is a delight, 8 minutes of West Coast magic; the organ sound that underpins the track, alongside the guitars and flute, make for a totally immersive expansion of the mind.
'Egyptian days' has a heavy Eastern Psych feel to it, percussively guided and complimented by the sitar; its a mellow trip that rolls along with charm.  Elsewhere, the flute led 'Voyage of the Crystal Bird' displays fantastic vocal harmony with Jennifer Williams. Once again, 'Forest Path' offers a rustic folk form, whilst maintaining a psychedelic feel. 'Rania is a heavier number, steady paced drums and distorted guitar strokes give it an early 70s psych rock quality that builds up to a noisy, crashing finale. The album closes with the the title track 'Day of Light'  another harmonic folk number reminiscent of  The Hangmans Beautiful Daughter era Incredible String Band.

Fans of folk music; be it traditional, acid or otherwise will find much to enjoy here; as will anyone with an ear for west coast psych pop. The album balances both approaches and delivers a different kind of album. One of the records strengths lies within the interesting vocal harmonies between Constantine and Jennifer Williams, which make for a really engaging listen.

Day of Light on Band camp