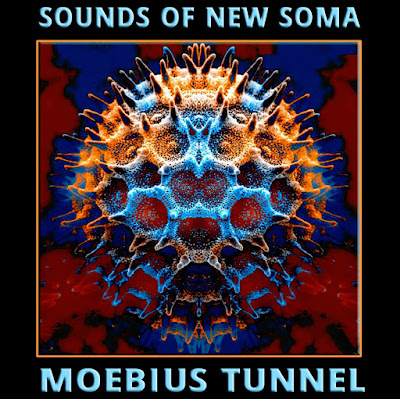 Neo- Krautrock duo Sounds of New Soma return after 2014's 'Beyond the Acid Dream' with a new album  'Moebius Tunnel, and a style that expands upon their debut albums "sound cosmos".

The album starts beautifully with 'Lysergdelfin, at first an ambient piece, the music developes adding synthesised layers and allows itself to grow as the guitar strokes becomes more and more revealed. 'Kosmonautenglück' is a swirling ambient drone complete with lasers and space age synths. Next comes 'Subraumverzerrung', a cool track and the first to have tempo added by drums, hushed vocals accompany the rhythm and synths , it's a captivating journey, sounds fantastic through headphones too !  Speech/Apfel is much more of a cosmic drone than previous tracks featuring more of their layered synthesised tones, the guitars that are hidden within add to the track. 'Morgengebet is a stunning 11 minute long psychedelic foray into Space featuring programmed drum patterns and more intriguing guitar work. The album closes with 'Neuland', it's another otherworldly electronic ambient track with palpitating synths, without doubt an apt conclusion to a very pleasing album.

There's a more disciplined approach to Moebius Tunnel than its predecessor and it really pays off. As a whole, Moebius Tunnel is a trip, incredibly atmospheric yet structured whilst never meandering, its going to be interesting to see how Sounds of New Soma evolve their music in the years to come.
The album has just been released on Tonzonen on Cd and a limited run of 250 blue 180g vinyl, There is also a very special edition of 50 that includes poster and other treasures, more details are available by clicking the Tonzonen Records link below.
It's also worth noting the distinctive album cover which comes courtesy of artist Mark Reiser who in the past has worked with Nik Turner and Hawkwind.
Interesting stuff.