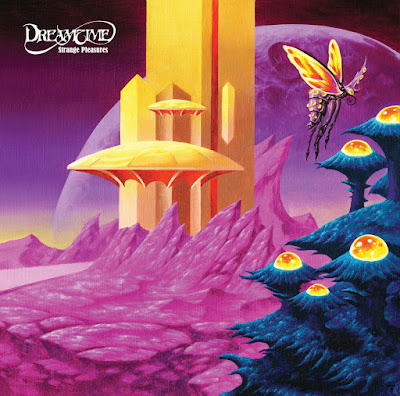 Three years have passed since Brisbane's Dreamtime released their last album 'Sun'. For the development of their latest opus, Dreamtime went about creating an imaginary, dream-like sci-fantasy, that follows a spirit's journey from the human body through death: mystic rituals; the spirit world; a soul's liberation into the cosmos; multiple reincarnations, and out into astral journeys and alien encounters.

The Synthesiser driven 'Luminous Night' kicks off the proceedings through science fiction laden drones and seventies rock guitar freak-outs.  Amazingly, within the background, there are elements of eighties electronic, cinematic soundscapes, as well as sixties tinged pop- beat breaks.  Somehow, they all come together in a near perfect eleven minutes.

'Golden Alter' commences as a spiritual tribal chant complete with mystical vocals and evolves into a heavy duty trance, that seems to smash its way forward in to your mind, whilst remaining focused and engaging.  'Fire' is reminiscent of the band Goat in its fuzzy Guitar sounds and structures, but also vocally connected too; this is easily one of the records many highlights.

'The Sentient' is a stomping, cosmic freakout and continues onwards before ending in strange intergalactic sounds and blurbs.  The title track is an epic, trippy number that slowly grows in to a heavy psychedelic rock without letting go of the intensifying pace from within the grooves.
'Spectral Entropy is easily one of the best tracks you'll hear this year; a mammoth space age, Floydian acid soaked, rock masterpiece.  It draws you in from the first brain frazzling oscillations, to the moment the drums kick in and take you out into the beyond for ten fantastic minutes. Closing track 'Serpent Tongue' is another sonic assault on the mind; energetic and fierce, this album won't go out on a gentle note!

Strange Pleasures is by far the bands most accomplished piece of work to date; the arrangements are meticulously thought out and realised.  It's a pleasure indeed to hear a bands evolution in such a magnificent way. I was new to Dreamtime when I was fortunate to review the Reissue of 'Sun' via Cardinal Fuzz earlier this year and its really nice to be able to pass comment on their latest release.
This a record without space (ironically given its Sci-fi sound) every note and noise has its place and brings something different, this makes for a richer record, elevating it towards the stars.
Australia continues to produce some really fascinating artists; it'll be good to see Dreamtime gain more acclaim following this release and surely some UK shows too. Listen to the album on the player below and look out for the physical links via the Labels supporting them.
Highly Recommended.


Strange Pleasures was recorded by Darek Mudge at The Shed Recording Studio over two days on a old automated analogue desk, the warm, vintage sound of the recordings perfectly captures the tripped out visions, mys cism, and spirituality of the music herein. Presented on all-black double vinyl housed in a gorgeous gatefold sleeve featuring original artwork by Indonesian ar st Riandy Karuniawan.
Posted by atom heart mutha at 17:18