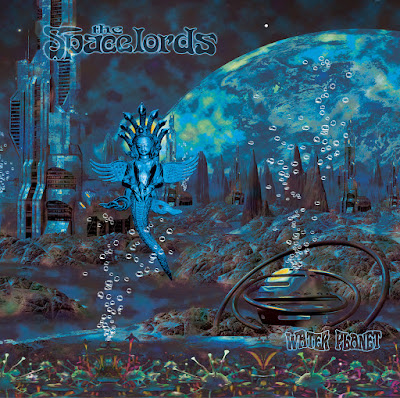 It doesn't seem so long ago that I talked about the last album by Spacedelic rock trio The Spacelords 'Liquid Sun’; unbelievably 18 months have gone by and its with pleasure I’m able to pass on some words about their latest trip 'Water Planet'.

Listeners and lovers of both 'synapse' and 'Liquid Sun' will doubtlesly be hugely satisfied with the latest release; the sound remains heavy and expansive and it’s hard not to wonder how the band as a trio manage to make such an immense sound. Within the music are fantastic Stoner space jams filled with creative brain melting panache, in fact I'm not sure describing the three tracks as jams is doing them justice, there is far more focus here and control as the music unveils its many treasures at every turn, the journey may be long but there is never a dull moment.

'Plasma Thruster' launches the record in to orbit, pulsating as it grows over spaced out basslines whilst majestic psychedelic guitar licks lead the way, the tracks has a sturdy build and thanks to the hypnotic drum patterns moves ever forward over 11 minutes that are over almost in the blink of an eye.
'Metamorphosis' follows and demonstrates echoes (Yeah I said it) of very early 70’s Floyd in terms atmosphere; the track builds and bursts with cosmic flair before finally launching itself into its final blast of urgent stoned out rocking. 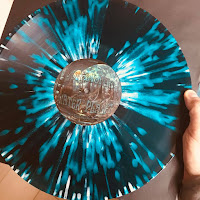 'Nag 'Kanya' completes the trilogy of tracks over 20 minutes. Trippy Eastern flavours swirl transcendentally to assist the music as it evolves to peak as a giant freak-out reminiscent of the final section to Floyds ‘One of These Days’; I’d be very surprised if ‘Meddle’ wasn’t a big influence on the band, not just on this record but generally speaking too.
The trio have released without a doubt their finest album to date, it’s a record that lives up to the anticipation that inevitably comes when a band with a magnificent track record such as The Spacelords announce new material. 40 minutes zoom by and ‘Water planet’ is one of the most satisfying records you’ll hear right now.
Tonzonen Records have set the date for a Gatefold splatter Vinyl release which is limited to 1000 copies; shipping date is around November 20th and includes unlimited streaming of Water Planet via the free Bandcamp app, plus high-quality download, Cd and streaming platforms are available now.