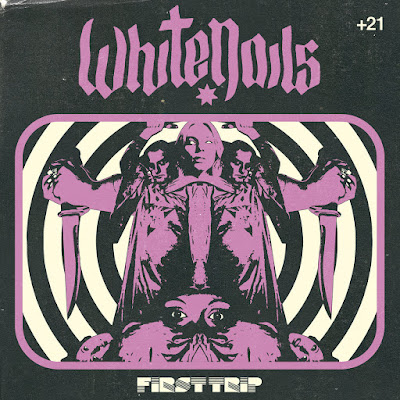 Quebecs six-piece stoner rockers, Whitenails, play amped-up, rock 'n roll riddled with massive riffs and  vintage swagger; their debut album 'First Trip' has been given a vinyl release via Kozmik Artifactz, following its initial CD release on Magnetic Eye Records.
Whitenails were started in 2015 by guitarist Taylor Johnson (ex-Atomis) following a meeting with local tattoo artist and guitarist Danahé Cote. They agreed to jam in Cote's "side project."  Six months later, following a combination of hard work and a solid live reputation as a powerful act, WhiteNails opened for The Sword and Royal Thunder.
First Trip is a great debut; a really confident headbanger, full to the brim with fuzzed up riffs and stoner attitude.  How the band have managed to make and release music in such little time,  yet delivering a confident well-constructed rock LP, is a triumph.  There are no fancy tricks on display, just good old fashioned ballsy rock; the kind you get from QOTSA on a good day.  Sabbath are in there somewhere too, but as with all savvy bands, Whitenails know how to take something familiar in a vintage style  and make a sound of their own.  The band effortlessly deliver eight slabs of groove heavy, sonic Rock'n'Roll; tracks such as 'In My Blood' and 'Silver Linings' show a will  to conquer and a desire to stick around for many years to come.  An album as strong as this deserves to be discovered and shared.  Get on it!
Hats off too to the designer of the wonderful, Fulci inspired, cover art work; it looks stunning and absolutely sells the flavour and tone of the music; very striking and very cool.  This is a great release and well worth your attention; seek it out and discover for yourself.