The City of Bath's Sergeant Thunderhoof deserve your attention; simple as that. Formed in late 2013, the band have played alongside Mos Generator, Valfader and Gonga and earned the reputation as a strong live force. In April 2014, the band released their debut EP 'Zigurat', a fine StonerRock noise that contains the track 'Pity for the Son'; the perfect introduction to the rest of the EP .

So it was good to hear, earlier this year, that the band were recording a new LP at Stage 2 Studios in Bath with Ben Turner; and it doesn't disapoint.  Opening track 'When Time Stood Still' brings the heavy grooves courtesy of Jim Camp's Baselines, coming in at just over 9 minutes; it shifts and moves pace effortlessly pounding its way to the finish.  Darren Ashman ensures the pounding continues with Planet Hoof and its heavy crunching riffs creating a wonderful wall of noise.  Next up comes the brilliant 'Reptilian Woman'; another solid slab of heavy that showcases all the talents on offer here from the band with a confident ease. All of this continues through 'Enter the Zigurat' right into the mammoth 13 minute long epic 'Goat Mushroom'.  Album closer 'The Staff of Souls' has a great PostRock drumbeat running through it and is a satisfying and fitting finish.

There's a huge amount to enjoy here over the course of the albums 50 minutes;  Dan's vocals complimenting the crunching riffs from Mark Sayer, and then theres the Psychrock grooves. The album is released on November the 5th to download on Bandcamp and there is a limited Special Edition run of 100 CDs which i'd suggest you get a preorder in for now.

Ride of the Hoof is highly recommended, find the band on the social media links below. 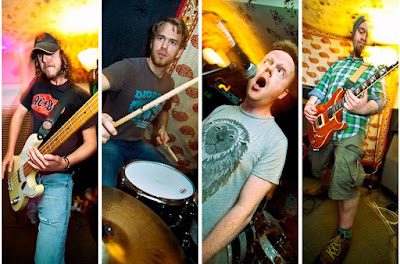