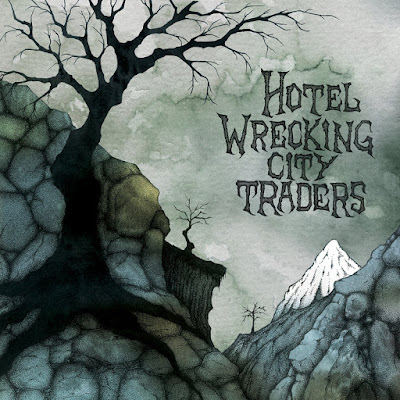 I think it's fair to say that great music has yet again arrived from Australia; recently I really enjoyed 'Mara' by Adelaide's stoner two-piece 'Filthy Lucre'.

'Phantamonium' is the latest release from Hotel Wrecking City Traders; a heavy psychedelic noise duo that have just released an LP with a strong emphasis on drum led, heavy instrumental rock on Sheffield's Evil Hoodoo Records.
For this release, the band have guest guitarist Raul Sanchez i Jorge (River of Snakes/Magic Dirt/midnight Woolf) on board, to add an extra dimension to the bands music.
Within the first minute of opening track 'Dusted Pines' the rhythmic drum patterns over spaced out guitar sounds promise something special; building through the pounding drums that ascend whilst the guitars become fuzzier and louder. The change in beat at the 7 minute mark, and the powerful percussion with the sound of sirens close the song perfectly. The title track follows and once more resonates a build; driven by drums as the guitar drone reaches its ear bleeding peak. 'Droned and disowned (Pt.1)' continues the formula of evolving into a powerful walls of noise; the 20 minute long (Pt.2) can be found on the bands recent 12" split with the band 'Hey Colossus'.  The final track of the LP is the brilliant 'Entering the Lodge'; a more intensely paced instrumental than the rest of the album that has a definite SpaceRock feel to it. There is a huge amount going on with this record; the feedback you experience heightens the musics intensity without overpowering it. At 40 minutes long, 'Phantamonium' demands multiple plays.
This album is available to buy digitally from their Bandcamp page. There are a limited amount on white 180g vinyl from  Evil Hoodoo Records.