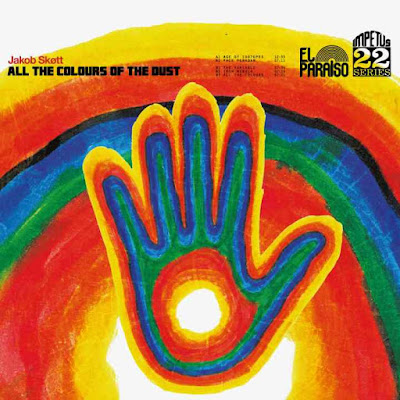 Causa Sui's drummer Jakob Skøtt's on a mission to go,"all in' on the third installment of his "drums versus synthesizers" vision; 'All the Colours of the Dust' is the follow up to 2014's 'Taurus Rising' and is further proof that Skøtt is without doubt one of the greatest drummers on the planet right now.

'ATCOTD' opens with noise, random squelches, blips and synths, drums and cymbals,  seemingly banging with no sense of rhythm; Then the drumbeat, that features for most of the 12 minutes of 'Age of Isotopes,' kicks off and suddenly, nothing appears irregular at all; the track plays on relentlessly, before reaching calm, just before it ends. 'Face Peradam' showcases some real skill again, in terms of keeping a heavy flow of beats, whilst maintaining harmony with the synths; this theme carries on the follow on track 'The Variable'.
'Iron Nebula' is hard rocking and has a lot in common with the last proper Flaming Lips record 'The Terror'; it bursts with motor like power and then energetic drum explositions as it draws to its conclusion.
The final track is the magnificent 'All the Colours'; a mammoth piece, that smashes it's way through its 7 minutes demonstrating an original style, with shades of Can and Bitches Brew.
It's a difficult record to pin down; there are elements of freak Jazz and space funk. The album is  heavy and rocking, but the use of the electronic instrumentation takes it somewhere outside of what you may expect.  In fact, the synths here compliment the drums perfectly, offering a relentless 40 minutes that doesn't let up until its final note.
I'm not sure who won the battle of drums Vs synths this time; there's some really incredible  percussive work going on, along with some meaty beats and rhythms. There's also some interesting synths too, not all is as chaotic as it first appears, there is a definite coherence that flows through the albums 5 tracks.  In terms of a winner, I think it's fair to say that it's the listener.
The album is available from El Paraiso Records on the link below.