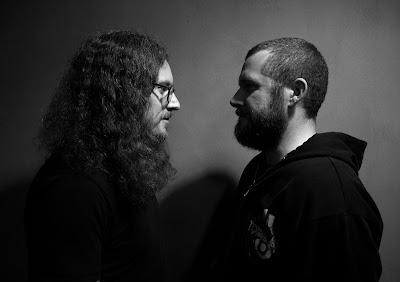 Hi Ben! It’s great to catch up with you; how’s things?

Hi John!  Good to hear from you too man.  Things are great! We're playing our last show of the year tomorrow night, with our Cardinal Fuzz label-mates - ZONG.  They had a show fall through and Zac got in touch to see if I could book something last-minute, so we did, and it'll be a sweaty, hot day here in Melbourne for it! Thunderstorms are predicted, so it might get quite tropical!

That's a great double bill!  From what I understand, there’s a great scene right now in Melbourne; do you share a bill with the same bands often or mix it up?

Melbourne is pretty crazy for the sheer number of bands and venues.  It’s a very active city in that regard. We try to mix it up as often as possible every time we play and try and mix genres and styles for each bill as well. Occasionally, we’ll do a small festival or all dayer, with a sort of focused, heavy genre vibe.   Mostly, we like our shows to represent our own tastes and just enjoy playing with interesting bands and artists from all walks of life and genres.  When we toured Japan, this was evident at every show; a real mish-mash of styles, and it makes for a fun time for those playing and attending in the audience.

It's been a good one.  We released our latest double album 'Passage to Agartha' in September and have had our good friend Josh (Spider Goat Canyon) playing bass with us since around June or so. It's been a good time and the feedback on the record has been super positive.  It was great working with Cardinal Fuzz for the first time and Evil Hoodoo for the second time.

Yeah, I was really pleased to see you were involved with  Cardinal Fuzz; they’re a great label to partner with Evil Hoodoo.
Tell me a little bit about the processes you go through as a band when you're recording.

We work quickly. This is mainly due to budget.  Most records are done in a single day and are improvised wholly in the studio on that day.  For 'Passage to Agartha' we did 2 days and a day of overdubs (bass and synth).  This is why it took a little longer.  We really enjoy the improvisational aspect of recording and allowing intuition and the nuances of interpretation between us to come to the fore. We've recorded at a bunch of different studios over the course of the bands history, as a change in environment from record to record seems to work well for us and creates a sense of adventure.  We record live together, no studio trickery or anything like that.  It's all very much a capturing of a moment in time for us each time we are in there.

It's incredible how tight that sound is, especially coming from intuitive jamming.  Does it take a lot of rehearsal or are you in place where you and Toby can read each others cues instinctively 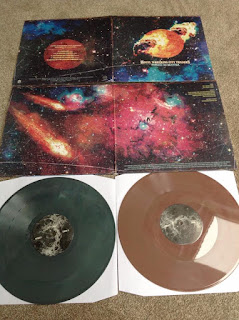 Thanks. Yeah, people ask us at shows all the time what the song we played was and which album it’s on! Funny thing is for us, records and shows are often two separate endeavors. We do occasionally combine the two, but it really depends how many minutes we are allotted and judge it on a show to show basis as to whether or not we will play anything off a record. Our songs are traditionally very long so for us to play one song is sometimes an entire 30-minute set. We go back and usually pick a couple of songs of a record and learn them and then have those in the back pocket should we feel like playing them at a show where we have a longer amount of time to play with. In terms of rehearsal, we try to get together once a week with the sole reason being the catharsis and the sheer joy of it. Depending on what is ahead, we may dedicate some time to learning old songs again but really for us, the goal is forward progression and trying to create new and interesting ideas that sometimes we will visit at the live shows. It might be a tuning or a tempo or a beat. Occasionally riffs will morph into the set from previous jams but really, we take each show as its own moment and its own entity. It keeps it exciting for us that way, and for those who come see us live on the regular – each show is different. It’s more interesting for them, too.

What were you listening too whilst you recorded the album? Does that ever influence your sound?

Toby and I both have quite far-reaching and broad tastes. When we record, we don't really listen to anything and allow our ears a bit of a break after the inevitable ensuing onslaught. I do recall listening to stuff in the car to and from the studio, but I can't recall exactly what it was. I think any artist or musician is influenced by what they listen to somewhat. We are more influenced by how we feel on recording day and how much coffee we've had and how many beers get emptied and how much weed is torched. But predominantly our music is a reflection of ourselves as individuals and how we join together. It is a product of an internal and shared environment and is about feeling certain ways on certain days. Some positive, some negative. It’s a tapestry of different expressions and experiences and how they affect us. This time around felt for me personally, like it went by really quickly. We recorded 2 hours plus of music in a day or so.

Yeah for sure. We are talking about recording our first one with Josh as a trio in the new year,  probably February or March.  I think this one will continue in a heavily improvisational approach as that's what we do when we get in the jam room and play. We rehearsed two tracks of the latest record for our recent live shows which we sandwich in between long improvised chaos.

It must be interesting to see how the added dimension with Josh steers the new music; is he coming tonally from the same place as you and Toby?

Josh has his own thing going on for sure.  We have a project called Daggers Mid Flight, which has released two albums and played a bunch of shows.  It is essentially a no rehearsal, improvised collaboration between HWCT and Spider Goat Canyon. We’ve known Josh for a decade now and played shows together separately and a Daggers Mid Flight.  We’ve toured Japan and Australia together and get along great as friends.  So as far as how things are sounding right now, both Toby and Josh kind of just made some very minor adjustments to their tonal approaches, so as to create this mammoth wall of sound.  The reason we asked Josh to play with us was because of his very unique playing style, and an unconventional approach to tones.  He loves improvising and from day dot with him, it’s been so effortless and just a total blast. We’re very stoked to have him.

Japan must’ve been a thrill?  Can you see yourselves travelling further in the future? It’d be brilliant to see you, here in the U.K. 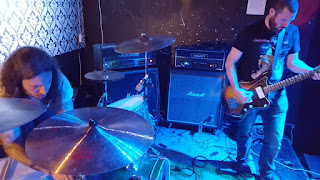 Japan was a great time. We played 12 shows all across the country. The last time we were in the UK was 2012. We played Deserfest and did one of favorite ever shows in Bristol, in a church with Hey Colossus; The Body and Arabrot.  It was a great experience.  We are really keen to make it back to the UK for shows with the Hey Colossus boys and back to Spain and hopefully some other European locations. We would absolutely love to get to France and Germany.  If anyone reading this is keen; drop us a line! We’re looking to play shows in New Zealand in the first half of 2018 and would very much love to get back to your side of the world, soon after.

This year has seen some great releases. Tobz and I are both digging on the new Quicksand album 'Interiors'.  They were a favorite of ours in the early 90's when we first started getting into playing and learning our instruments. We're actually going to see them play in March and are super excited for that.  Newer bands-wise....we're into our friends, Mote, who we asked to play with us tomorrow night.  Mote are this sort of kraut-inspired, post-punk-ish sounding band, with great guitar lines and synth drones. We both dug on the latest Part Chimp record that came out this year, and of course the latest Hey Colossus record 'Guillotine'.  I literally just listened to a track off the forthcoming Carlton Melton LP, due out in Feb, and that was sounding great!  I know Toby has been thrashing 'War Moans' by Mutoid Man a lot when he picks me up in his car.  Also 'Every Country's Sun' - Mogwai is great. We'll be seeing them in March, too.  Always a great live show.  I just discovered Angel Olsen and have been enjoying listening to her songs, too.

Thanks again for catching up with me Ben, it’s been a pleasure. I’m really looking forward to seeing where the band go in 2018. I’ve asked some of the bands to put together a mixtape to be included with the interview; there’s some really interesting choices in yours.  What would you say these choices represent for you?

It was my pleasure.  Thanks for your support of what we do and for asking us to participate in this interview.  I just put that together, in a sort of stream of consciousness type way.  Haha!  I looked at what had the most plays on my computer and just started putting the songs in there, in no particular order.  I tried to include a few of Toby's faves in there too.  Variety is the spice of life and the musical ocean is as deep as it is far and wide - dive in and go for a swim!  Look out for the sharks!
Cheers, John