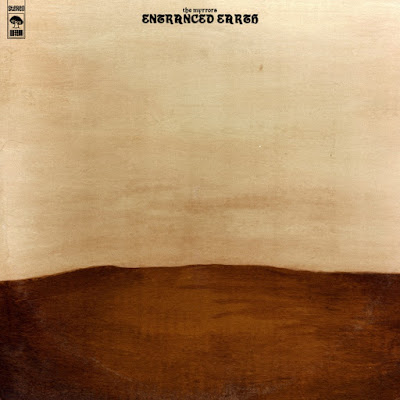 Currently based in Tuscon,  Arizona, The Myrrors have returned. Following the doped out haze of  2025's 'Arena Negra' the band have managed to deliver one of the most confident and sonically pleasing trips of recent times.
Immediately noticeable are the wealth of instruments utilised throughout the album; from traditional drums and guitars, to tablas, harmonium and alto sax; they're all present.
The mournful shimmering of  'Mountain Mourning' opens the record and leads into trance like  psychedelia of 'Liberty is in the Streets'; it's rhythmic drum patterns light the way towards the next stop. 'No clear Light' is a meditative mantra; Eastern influences and flutes all combine into one wonderfully blissed out whole.  The title track itself 'Entranced Earth' is further proof of the care and attention that has gone into developing such a full and rich sound.  Whilst it's easy to be taken on the journey by the mesmerizing mix of motoric drums and psychedelic swirling music; there is so much more going on that will be enjoyed with every future listen. Elsewhere is the slow paced kaleidoscopic 'Invitation Mantra' and album closer 'Surem Dervish'; a more groove laden track that steers it's way to albums finish.
The band have clearly set out to Make a mark and should deservedly flourish having recorded a much tighter and focused record than previous releases, without changing their identity.
This is where 'Entranced Earth' succeeds the most; it's hypnotic charm lies in the crafting of the songs; each one a spiritual mantra of sorts.  With every track comes a brand new soundscape and a lavish listening experience, and once more with this release we are rewarded with another strong contender for one of the most interesting albums of the year.

Buy Entranced Earth from Beyond Beyond is Beyond Records