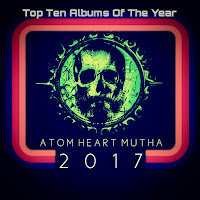 On December 1st Atom Heart Mutha Started to look at some of the album highlights of the year, you can see the first 30 Here at

Following on is a List of my favourite 10 albums, again in alphabetical order.
As before you'll find playable versions of them to hear by clicking the players. Over the coming weeks I'll be discussing some of the final 10 in more detail with many of the artists that recorded them.


Be sure to keep checking back for more on the albums that shaped 2017 and a few surprises too including the albums of the year according to Atom Heart Mutha Contributor Viva El Swain!

Released in March of this year, the Russian trio delivered an exceptional blend of psychedelic rock and kosmische styles. Released by Rocket Recordings 'Tschak!' is the sound of electronic madness and technical focus leading to one fantastic whole

Hotel Wrecking City Traders - Passage To Agartha
The Australian duo released an incredible album of heavy psychedelic jams, tightly recorded and performed at the end of this year.  'PTA' was a huge step forward, in terms of song writing, from 2016s superb 'Phantamonium'.  Utterly engaging from start to finish.

The Judge - Tell It To The Judge
Following last years brilliant debut on Ripple Music, the Illinois four-piece powered forward this summer with 9 tracks of heavy psychedelia and hard rock. Once more, the band have successfully unleashed an album of vintage style with contemporary attitude.

Samsara Blues Experiment - One With The Universe
Now in their tenth year, the Berlin trio released their most accomplished and absorbing album to date. Both addictive and compelling; this an album that continues to evolve and grow with every listen.

Space Witch - Arcanum
An unexpected treat from Stoke On Trent, in the UK, came via the band Space Witch in June of this year.  The four tracks on offer moved effortlessly through stoned out space prog to expansive doom and beyond; long experimental pieces unravel themselves over 40 minutes of captivating sounds.

Vuelveteloca - Sonora
Fuzz Club Records released the Chilean hard-psych outfits fifth release in October of this year to instant praise.  Full of dark, heavy, stoned rock vibes 'Sonora' is an album that will continue to deliver for years to come.  Without a doubt, this is one of those records I wish I could hear for the first time again.

Siena Root - A Dream Of Lasting Peace.
Stockholm's Siena Root have been around a while, surviving a few lineup changes.  'A Dream of Lasting Peace' sees the band push the envelope, in terms of accomplished song writing and skill. Every track oozes charisma and style, in an album loaded with brilliant hooks.  Following it's release, the band also toured with Deep Purple, as part of their tour in Germany.