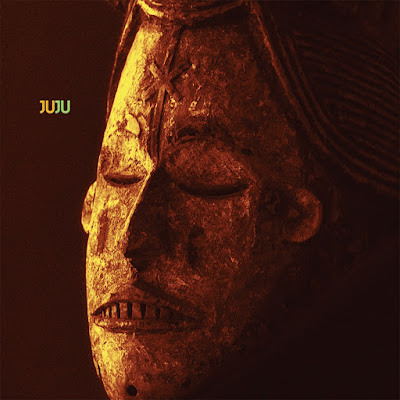 JuJu is the latest project by Gioele Valenti (Lay Llamas, Herself).  It is the story of an on going exodus from Africa that, more often than not, ends in tragedies at sea. The story encompasses a mix of rhythmic psychedelia, ancient myths and Mediterranean neo-paganism.
Driven by a monster bass line, the album starts with the hypnotic 'Samael'. Ghostly vocals and unexpected drum breaks within the song follow an unpredictable path; A great way to open the album.
'We Spit on yer grave' is a total change of pace and style; it has strong sonic reverb and a drum pattern reminiscent of The Jesus and Mary Chain.
'Stars and Sea' starts with  an acoustic guitar and haunting chants. This track beats along then suddenly bursts into something with much more groove and and fantastic drum work.
'Dance with the Fish' is a synthetic drone with hidden piano sounds and atmospheric texture that add to the mysteries maritime theme of the album itself.  'Sunrise Ocean' is another bass driven track with enigmatic chants over a measured drumbeat. 'Lost' is a marvelous piece of psychedelia building over a piano and synths to its conclusion and repeated vocal "Where do we go from here now that you've lost your soul?".
To conclude, 'Bring 'em War'  offers a  great mantra over a fuzzy guitar lick filled with radio frequencies and weird squelching electo sounds hidden in the background.
The album itself is a wonderful listen, crafted with care and skill; there isn't a noise or sound that's out of place. The subject matter, whilst perhaps melancholy in tone, is uplifted by the music it's married to. The influences within are varied but, without a doubt, this a highly spiritual psychedelic album.  JuJu is one of the most essential records of the year so far.


The album is released in early May and there are a limited amount of orange crush coloured vinyl available from Sunrise Ocean Bender.  Preorder one now on the links below.