The last time Ghost Box Orchestra released an album was in 2013. This year the follow-up 'High Plaine' surpassed all of my expectations, by miles.  The songs featured this time around were far more intricate and focused, yet intensely heavy.  From the opener 'Flutter' and its brain smashing, psychedelic drones, you could tell you are about to hear an album that would refuse to sit quietly, in the background.
I can't recommend this album enough; it's a record that gives something new with every listen...if you haven't heard it yet, you need to click the player now !
I caught up with Jeremy Lassetter from the band to find out how GBO's year had been. 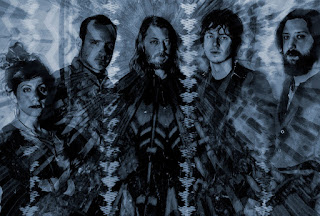 Hi Jeremy, thanks for catching up, how's this year been for the band?

This year has been great.  It felt fantastic to finish up the record, get the cover art all set and be able to release it through Evil Hoodoo.   We got a great reaction from the record and it's been nice to hear from everybody that has reached out.
My favourite show of the year was Fuzzstival; our local psych/fuzz fest.  Every year it's two full days of the best that Boston has to offer in the psych/garage/fuzz crowd and it's always a blast to be involved.

We've been taking things slower this year, playing less shows and it's been working really well. That's given us all some extra time to do some of the things we've all been wanting to do (some of us are starting families, writing, recording and working on other art). We're getting to a good place where we can all go off and do our own thing to scratch those creative itches. For me, it's been nice to do some writing, spend time working on visual art and making some videos for the album. It takes some time, but I dig it - and it lights up some new parts of the ol' brain.

High Plaine is a deeply focused record; was it difficult to record?

In a way, it was difficult to record.   Tracking was fun, but intense.   We tend to go into the studio chomping at the bit to knock everything out.  It's easy to get ahead of yourself, so it's a matter of allowing a little more time than you'd think to get everything tracked and still allow room for the unexpected.  From minute one, we pretty much turn out all the lights and keep a pretty dim atmosphere; it's intense, but it's by design.   After about a week, it's time to get out and get some sunshine!

Where did you record the album?

We recorded with Dan Gonzales, at a place called Oddfellows, in East Weymouth, MA.  It was a huge live room and we were able to spread out and really use the space.  Some overdubs had us scooting a floor tom across the entire room, whilst letting the reverb change and morph through the take.  We found piles of metal in one of the side rooms and found ways to incorporate them.   I think my favourite over dub was lining up a lane of seltzer and beer cans, then stomping those, in time with the snare.  We probably had close to 100 or so!

You mention Fuzzstival; is there a big Psych Scene in Boston? Do you tour wider than the USA?

Boston has a strong psych scene.  Some of my favs are Creaturos, Magic Shoppe, Doug Tuttle, Prefab Messiahs, Black Beach, December Sound and Beach Toys.  These guys are all busting ass and making some excellent music.  As we've been playing fewer shows, it's been nice to take some time and go see everybody else do their thing.   It's been energising.  We have done wider US tours, but sat it out this year - it's very possible we will next year though.  I think everybody in the band is missing the road - and it's about time we get over to the UK!

Plans for 2017 include revving the engines and writing some new material.   We have a good amount of unreleased material, so it's about time we look at putting those out.  We'll probably play a handful of shows while everyone continues to work on some of their own projects.   There's also a special edition of High Plaine in the works and we're sorting out the final details now.

Do you have a favourite record from this year, and are the any bands you recommend looking out for in 2017?

Psychic Ills put out one of my absolute favourite albums this year.   To say I've been listening to it a lot, is an understatement.   I love what they are doing on 'Inner Journey Out' - lyrics, pedal steel and overall meditative vibe.  It's a special one.   I look forward to anything those folks put out!  Moon Duo has a new one coming out too...always ready for more Moon Duo!
Look out for Ocular Audio Experiment; a really great band if you haven't heard em yet.   Every once in a while, I get to sit in with them live and it's always a blast.


Thanks for catching up Jeremy; it was good speaking to you. Happy New Year!

Thanks y'all, it was great chatting.  Thanks for all the support and spreading the good word.  We'll see you in 2017!