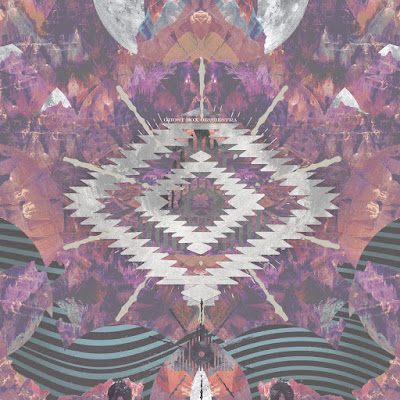 Even more great music courtesy of Sheffield's Evil Hoodoo Records. Earlier this year, the label put out the fantastic ‘Phantamonium’ from Australia's ‘Hotel Wrecking City Traders’ (and if you haven’t heard that, you really should!)
The label are about to melt your brain, once more, with a new release from Boston's ‘Ghost Box Orchestra’.
High Plaine’ is the third, full length, album, from the Massachusetts five piece. The follow up  from 2013’s ‘Vanished’ offers some seriously intense psychedelic sounds.

‘Flutter’ opens the record to the sounds of an organ and a heavy, pounding beat with crashing symbols. The vocals that elevate the track dominate, powerful guitars break in, resulting in a heavy psychedelic wall of fuzz. The title track ‘High Plaine’ is another hard, heavy paced mantra; monopolised, once more, by a weighty beat and sonic vocals, giving way to blistering guitars. ‘Socrates Burned’ is a searing kaleidoscopic monster; another track immersed in guitars and organs, gripped by speedy repetitive drumming; dazzling stuff.
‘Wave Goodbye’ and 'Dead & Gone' are much slower and atmospheric; in tone both are cinematic, yet maintain the feel of intensity that lives within the album, as a whole, the latter has a beguiling echo like quality to the song.
The album closes with 'Casuality Devotional' a wonderful 8 minute long epic that starts as slow burner before evolving into an almost trance like shoegazing drone. This final track explodes into a joyful, psychedelic wall of cosmic bliss;  a truly perfect finale.

‘High Plaine’ is a prime example of a band revelling in deeply focused music. The incorporation of atmospheric and hazysoundscapes built within songs is heavy stuff. The impressive guitar work and the move to bring the vocals more to the front, pays dividends. When the inevitable albums of the year conversations commence, this must be up there.
Essential listening.