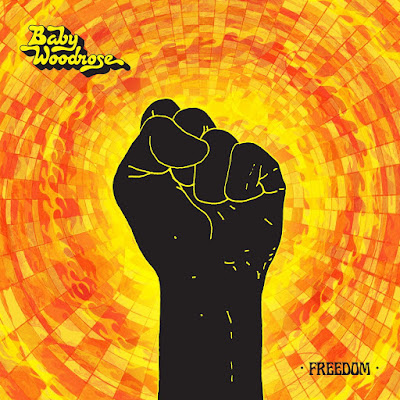 Has it really been 4 years since Baby Woodrose released thier last album 'Third Eye Surgery'?
Maybe it doesn't feel that long as Lorenzo Woodrose hasn't really gone away; his other band Spids Nøgenhat have gained a large amount of popularity in his native Denmark, winning 2 Danish Grammies for the album 'Kommer Med Fred". If you haven't already, you should seek it out.

'Freedom' feels like a heavier record than previous releases. From the very first track 'Reality'; Han Beck pounds the drums and drives the track alongside the guitar riff brilliantly, whilst lyrically, there's a cynical tone; it's a killer combination.

'21st Century Slave' has a great psych groove to it and talks about "the thought police breaking down his door" . 'Open Doors' has a contemporary Spencer Davis Group feel to it. There are a couple of more mellower offerings; the acoustic stylings of 'Peace' as well as the laid back 'Mantra' give some balance to the albums tone musically.  'Red the Signpost' by contrast, is a heavy psychedelic rock freak-out and a joyful noise of screaming guitar solos and space rock effects.

The standout track is, without question, the title track 'Freedom' an old gospel standard that was played famously as an improvisational piece by Richie Havens at Woodstock in '69.  The song is covered here with passion and given a 21st century facelift as a massive cosmic kaleidoscopic beast; one of the best covers you'll hear this year, for sure !

15 years on and now album number 7 and Woodrose and the band are on great form.  The music is sonically charged with energy and loaded with themes of mind control, brainwashing, slavery and oppression; the message is clear through; don't let the bastards grind you down.

This album has been recorded and mixed using tape for an "analogue" approach and utilises the recorded live in the studio to good affect.  Freedom is a highly vibrant and enjoyable listen; it lends itself well to loud volume and leaves no doubt the songs here on the album will blow your mind when you get to hear them played live.