Album Review...Church of the Cosmic Skull - Is Satan Real? 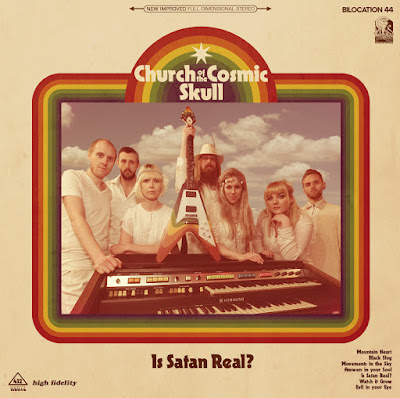 Are they a cult?  Are they a Church? Is Satan real?  Does everybody in Nottingham dress like this? Well, who knows...
I discovered Church of the Cosmic Skull whilst browsing label kozmik Artifactz's website and I'll admit, it was the cover art that caught my attention.  Further investigations online, and a comparison or two, to Black Mountain later, was all it took to make me want to explore further.

Album opener 'Mountain Heart' is an uplifting slab of heavy rock, driven by majestic organs and guitars.  It is rooted very much in the vein of classic 1970's hard rock; it's clever use of Bill Fisher's lead vocal, harmonising with the band as a choir, elevate the track over many contemporary rock bands that are around right know.  'Black Slug' follows in style, but its riffs are heavier and darker.
Elsewhere, there's the reflective 'Answers in Your Soul' a stripped down acoustic number and the epic, bluesy, 9 minute long 'Evil in Your Eye' to offer up a variety in approaches; the later having a wondrous and soulful Hammond Organ break that would've given the late Jon Lord a run for his money.  Title track 'Is Satan Real?' has a great groove to it, as does the excellent stop/start heaviness of 'Watch it Grow'.  All in all, the tracks add up to an addictive listen that's had me going back for more from the first time I heard it.

Whether, or not, you consider the bands image, or claims to be a church a gimmick, doesn't matter, in fact, you'll be doing yourself a disservice by letting that influence you.  Make no mistake, Is Satan Real? is a great record; the Black Mountain comparisons are justifiable, especially in terms of the vocals sound and harmonising style, it has much in common with 'In The Future' and their 2005 Self titled debut.  In addition, the choral vocals soar above, triumphantly fitting with that vintage 70's psychedelic rock sound.  The songs are expertly crafted and credit should be given to those involved in the recording and mixing of the album, for capturing an authentic old school rock sound, yet doing something that sounds contemporary and cool.  Church of the Cosmic Skull have put thought and effort into their sound, you really should check it out; this is a band I'll be very happy to catch live, as soon as the opportunity presents itself.

Church of the Cosmic Skull Bandcamp 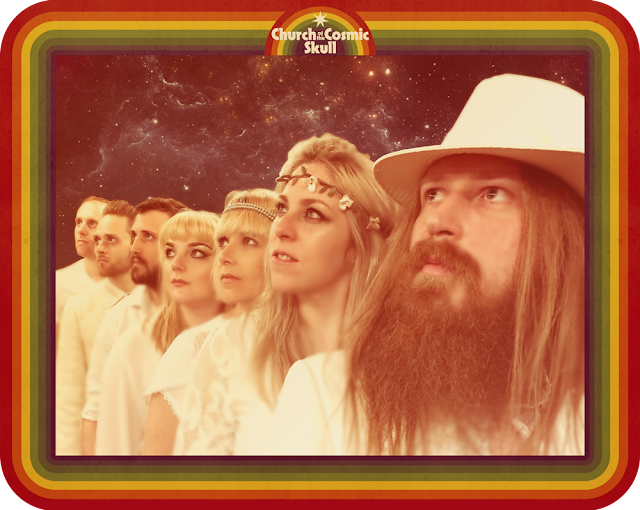