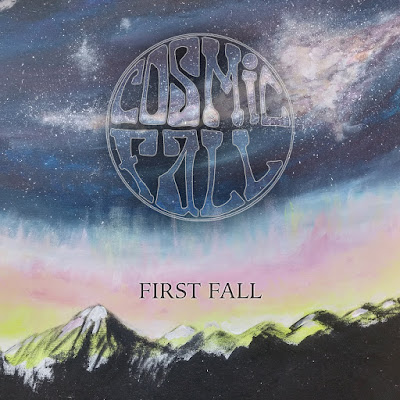 As 2017 moves on, Clostridium Records have released the first Long Player from Berlin's Cosmic Fall; a heavy, psychedelic rock act formed, in the summer of last year.
The band are said to follow in the tradition of artists such as Earthless; and whilst that may be true, to a degree, they also have something original within their approach too.

'Sun of a Gun' is a measured, bluesy rock number that emits an atmosphere of its own; it slowly travels its way over its 15 minute length, consuming your brain warmly, until reaches its climax, suddenly evolving into a rocking freakout!
'Road to Ufa' follows, and there's no escaping its stoner rock nod to Clutch, and the old blues feel of John Lee Hooker.  'I Must Obey' follows; a confident, strutting bassline, and, in its latter section, impressively rocks out, as if Jon Lord's drumkit got it on with a Tony Iommi riff!  For me, it's the standout track of the record.
The album closes with 'Jam I', a lengthy track with an intense groove.  The band are clearly comfortable with starting with an idea and rolling with it to see where it goes; despite its length, it manages to be pleasing, without wearing out its welcome.

Cosmic Fall do a great job of making music that showcase 4 songs over 45 minutes, yet maintain the listeners attention.  It's almost unbelievable to conceive what they have achieved in just 6, short months of forming.  Whilst often improvisational in approach; what is delivered feels tight and focused, this is something that the bands homeland contemporaries, such as Knall and The Spacelords, do so well; Clostridium Records have excelled, in adding a band of such high calibre to their arsenal and introducing them lovers of Heavy Psych Rock.

First Fall is a record that should be explored over time and with repeated plays; this is an earthy album that leaves you with the desire to hear it live, loud and without limits.  There are times when its sound is just too big to be contained on a record; how they choose to follow this mammoth debut will be an interesting reveal.

The record is available from the bands bandcamp page and as well as a digital and CD release there is a choice of three vinyl ops, Black, purple and splatter design.