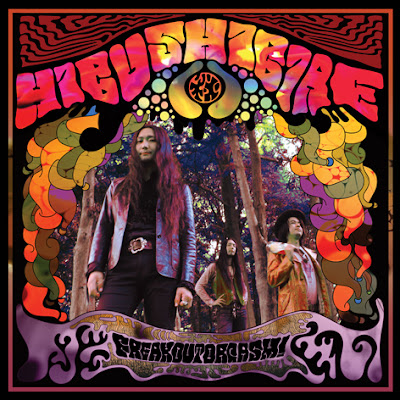 Osaka based, Japanese hard psychedelic freak out rock band Hibushibire (translated as freak out orgasm) were formed by guitarist Chang Chang and bassist 821 as an improvisation jam rock band in 2012.  It's taken 4 years to cut a record due to lineup changes; their debut was recorded in just a day at Helluva Lounge and then overdubbed with extra instrumentation to give it its psychedelic feel.  Finally, the album was mixed by producer Kawabata Makoto of Acid Mothers Temple at his mountain top studio temple in Osaka.

The frantic, feral noodling of 'Lucifer's My Friend' opens the record; the shortest track at just 3 minutes long.  It's hyperspeed, receptive groove and feedback serves like a statement of intent; and over the next 40 minutes your brain is getting fried.

'Hallucination Valley Blues – Flying Shiva Attach – Hallucination Valley Blues (reprise)' follows, within the dirty, fuzzed up guitars, sounds a cool groove nodding in the direction of Bonzo's masterful drum pacing on 'Moby Dick'.  The middle section becomes a bat-shit crazy freak-out, before settling down again into its beginnings of acid blues groove.  'Trepanation Breakdown' rocks on like a scuzzy behemoth, over an irresistible riff and sonic wall of noise and the album shows no signs of settling down.  Side two of the record is  'Deep Throat River HolyMountain High',  commencing at first in a gentler, more atmospheric manner; folk-like instrumentation gives the cosmic trip a unique and absorbing feel, before the tempos shift and the band build to an ear bleeding, guitar shredding, sonic blast of an ending.

It is said that the 4 tracks on the LP are shortened down as recorded versions, whilst live, their wild psychedelic, improvisational nature can make the tracks constantly, and organically evolve without the limitations of time; there is no doubting the skill in which the band have achieved this here. Whilst chaotic at times, Freak Out Orgasm! remains tight and focused; Hibushibire show a clever knack for making it seem like the music is out of control; however, like the best insane orchestrated works of Zappa and Funkadelic, to the raw manic caustic workouts of Acid Mothers Temple; this works incredibly well.

Kudos to label Riot Season Records here for putting out what is without doubt one of the most  essential records so far of 2017.  Hibushibire will give your brain a cosmic battering, and you will thank them for it!