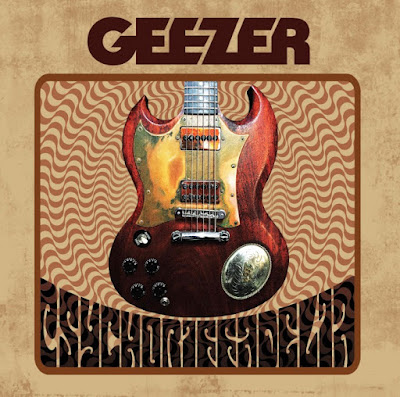 Now here’s a conundrum; do I research a band's bio before a review? Do I allow their words and photos positively or negatively influence my interpretation of the music? Nah! So all apologies upfront.

Geezer - 'Psychoriffadelia' opens with low guttural sounds then straight into a de-tuned cover version of Nazareth’s 'Hair of the Dog'.  The easily recognised riff surges forth, you can almost feel the sound wave created by those open strings.  Riff laden with quiet/loud sections, the next track 'Stressknots' maybe should have opened the album, but hey that’s my opinion.

The instrumental title track 'Psychoriffadelia' is where the album really starts to take shape; a combination of riffs and carefully constructed melodic chordal progression that draws the listener in.  It circles around but rewards you with the expected result; slowly building, yet always extenuating the main riff.  The drums drift in and out, giving a trippy, distant, hazy sound.  The tracks all intersect together, without any space, so seamlessly next up is fourth song 'Red Hook'.  Tremolo intro, with a haunting backing; the guitar riff has a superb repetitive eastern flavour and atmospheric slide guitar parts with the song featuring minimal vocals, six minutes long to soak up the centre of the album, nicely.  Spacey flanger sounds kick in, leading into the main riff of final track 'Dirty Penny'; a song of two halves.
Underpinned by a solid rock riff, soaked in modulation, the song starts; tight bass and drums carry the song for the first five minutes, before morphing into a guitar jam.  Halfway through the track, the guitars slow down in pace, as a more spacey sound swirls around, before the drums wind it down to silence for a few seconds before kicking back in. The guitar returns with a fresh wah laden riff. This starts what I’d call the second movement of the song, quickening pace with a more free form jam atmosphere, of a similar vein to the title track, these parts are where the album really shines.
'Dirty Penny' closes the album brilliantly, with an bluesy acoustic slide guitar section that drifts away to the end of the album.
Overall, a great album that I’ve grown to like and replay many times; the parts where it really excelled are the more wig out instrumental sections where the musicianship involved shone through. I'm still not too sure about opening with a cover version...
Recommended.