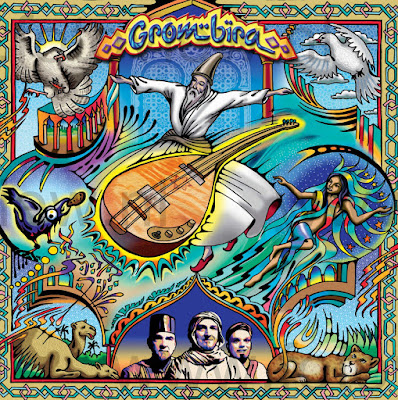 Hypnotic Bavarian Oriental Spacerock, makes perfect sense to me; and it definitely makes sense to Tonzonen records as they've just released the new Grombira record.
The band biography promises magic carpet rides with plenty of space to dance, in a nutshell, thats exactly what you get here.

The record begins with chimes and atmospheric rhythms of the track 'Pürreé'; the groove builds slowly over Eastern sound patterns and then suddenly explodes in to an incredible  high charged (oriental, yes) space rock freakout; the music is tight and engrossing. The trippy 'Carpe Noctem' follows with gongs and pipes and once more builds an ambience of cosmic oriental auras.  As with the opener, the song transforms into another hypnotic exploration of psychedelia and world rhythms before introducing trancey mantra-like vocals.
'Caravan is more stripped back piece played over simple rhythms and an acoustic guitar whilst hushed soundscapes of human interactions can occasionally be heard in the background.
'Goats in Space' is much more a traditional space rock track, the guitars are heavier and musically so too.
For me, one of the standout tracks is 'Priest of the Horny Kong' an irresistibly groovy piece that incorporates funky rhythms and bass over the Eastern styles and rocks out relentlessly, it's a trip you'll dance all the way through! The same can be said for the last track 'Selma'; whilst much shorter than most of the record at just under 6 minutes, it follows on as a full on freakout and really satisfying way to conclude the album.


The tripped out trio have put together a blend jazzy and psychedelic space rock and added oriental flavours with the use of sitars, ouds and lutes to make something very special; I hadn't heard anything by the band previously so some online reading explains just how hard working a band they are, especially live.
In fact the more you know, the more it makes sense that they have signed to Tonzonen; like label mates Knall this is a band that capture songs as moments in time, with every play live the songs morph and evolve, the recording process merely captures a snapshot and if you want to hear the bigger picture you need to see them perform. GOSR is a fantastic record and comes highly recommended; and to this day is the only LP I've ever been told goes well with olives and roasted potatoes.