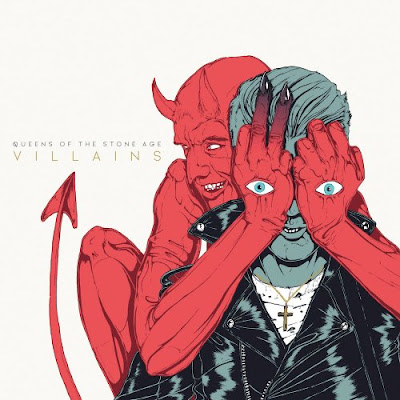 
In the twenty years since Josh Homme created his band Queens of the Stone Age, the musical continents have shifted dramatically, meaning the way we listen and consume music has taken such a monumental change that it has brought the once powerful music industry to its knees.

Maybe this analogy could be compared to the cave paintings of Stone Age humans, bringing down and killing the mighty Mammoth in order to survive.

Cliches over with; we arrive in 2017 with the impending release of Queens of the Stone Age seventh album “Villains”. Their last album “Like Clockwork” was released back in 2013 and to myself signified the ever changing band coming of age.  In the years between, Homme has collaborated with numerous artists,  most notably with Iggy Pop on his “Post Pop Depression” release last year and subsequent tour, culminating in a recorded and released show at The Royal Albert Hall.

Album opener Feet Don't Fail Me features an up tempo groove with dpop/disco grooves, nah! It’s heavy.  The second track is a much play listed first single The Way You Used To Do; this track divided the avid QOTSA forum junkie, but what's not to like? It takes the original rhythmic guitar style into a more developed sound.  Lyrically it sounds like Them Crooked Vultures at times. Domesticated Animals is a good example, with the question provoking quote “a revolution is one spin round”.  Fortress has an airy guitar sound, but at times reminds you of the previous album; is there such a thing as QOTSA chords or progressions?  Scratchy and urgent, Head Like a Haunted House crashes in; weird Troy van Leeuwen lap steel screeches underline a Dead Kennedys bassline. Intentional or not Un-Reborn Again flows with a T-Rex lyrical style; keyboards replace the cutting Les Paul sound of Bolan.  In a recent interview, Homme explained how, as the singer, he had to learn on the job in every show how to use his voice.
Cut to now and the falsetto voice is very much part of the Queen’s sound but sometimes he over tries the big “high ho-wah” without reaching it.  Hideaway is probably the closest sounding to “I Appear Missing” from the previous album; it’s possibly a song written during those sessions that needed more development.  Throughout the album, there are sounds and reference points that hark back to older songs that define its lineage.  The Evil Has Landed boasts  fuzzed guitars and and great drum beat by Jon Theodore on his first Queens recording.  This is the big sound that people expect, full of twists and turns, clocking in at six minutes.
Villains of Circumstance is a song that’s been around for a while now, first played by Homme during an acoustic set in London in 2014.  It’s become something of a fan favourite on YouTube. Tail ending the album, its wistful bassline and the chorus “Always evermore, and on and on” is a satisfying finish.

Eagerly awaited, as all releases by Queens of the Stone Age “Villains” continues the progression and path that Homme wants his band to take.  Will it be received by the fans in the same way as previous albums? The forums are alight as I write this with arguments and opinions... Let’s see how the dust settles.