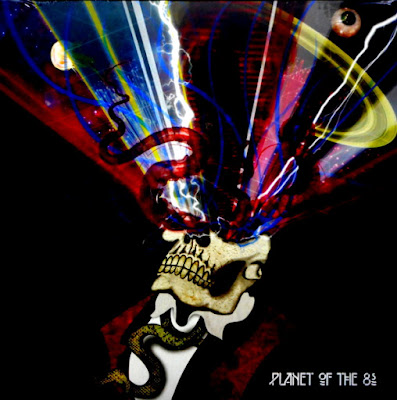 Words by Viva El Swain
Over the past few months, most of the music catching my attention, as I browse through the new releases,   seems to be coming from the Southern Hemisphere.  Here is another example that was passed in my direction by Atom Heart Mutha himself.

Planet Of The 8s hail from Newcastle NSW but are now based in Melbourne; they describe themselves as "heavy in parts but ass shakingly groovy". The trio consist of Michael Sullivan on bass & vocals, Justin Cruickshank on guitar and Peter Carter on drums. The self titled album was conceived from the off to be a 12" vinyl release, with the concept of the two sides being Space & Time, which incidentally was going to be the the album title (the first run of CD’s still bear this title) before the self title change.

Space: 'You Are Here' opens the album with the lyrics “space in another dimension, time that’s twisted lies” echoing the album title and concept; it’s built on a solid guitar hook, as it progresses it deviates and changes keeping you attached, before moving into an instrumental solo guitar, oozing unison bends and other such techniques. Ultimately, there's no point avoiding it, or skirting around the huge cactus in the room (ouch) these guys do sound like the evolution of Kyuss into early Queens of the Stone Age over most of the first side of the album. That said there are some really great songs here, superb vocals over solid stoner vibes that sound huge, third track 'Hands On' shows off that ass shaking vibe they speak about and is a worthy single.

Time: Swirling feedback introduces 'Transcending on the Golden Plains' followed with a fast paced riff with a rather other worldly motif and something about naked pixies prancing.  Lucky #7 builds on this template crushingly heavy but not venturing into metal but is definitely darker with a stoner vibe and shakes off the stereotypes that side one opened with. For me, The Alchemist is an album highlight with its distorted opening riff and mid song guitar break that doesn't linger, lasting only 4.07 gives a sense of get in, do your job and get out. I think this is the appeal of this band and album, it contains many of the requirements of this genre,

Plantet Of The 8s is heavy; it has a growing menace throughput but it doesn't fall into the trap of long jams or trips into psychedelia; it's tight, concise almost having a pop sensibility of the song comes first rather than over indulgence.

Something is happening in the Australian desert scene and I like it.

Planet Of The 8s Bandcamp.