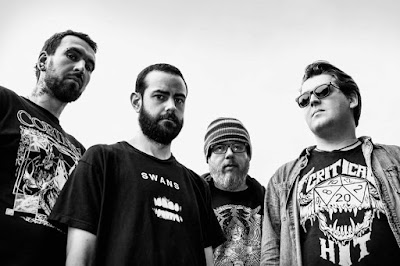 Hi there! Yes, it’s been a good year for Space Witch. We released Arcanum in June to some humbling reviews and played some standout shows off the back of it. We got to play with great bands and we met wonderful and supportive people along the way. We’re also very pleased to be working with Planet of Doom on the forthcoming feature film. Thanks for picking the album as one of your top 10 of 2017 and thank you to everyone for your continued support.

My pleasure, its a brilliant record. Tell me a little about the processes you go through as a band when you're recording.

When we’re recording we try to use the time we have as best we can. Whether that means playing the same riff or phrase over and over till its bang on or changing something previously written, it’s all about getting it the best it can be. We’re pretty open to introducing new ideas in the studio as well. Some of the best moments, for me, have been the spontaneous additions or the happy accidents.

What were you listening to whilst you recorded the album? Does that ever influence your sound?

I don’t know if there was anything in particular that any of us we’re listening to which directly affected the output. I definitely think that some of our extra musical interests were brought into the writing process.  Daz and Dan had seen Magma play London not long before we started writing and I was spiralling down a prog hole, so we decided to introduce longer passages where we could experiment with the sound a lot more and let a new direction take its course.

I think thats what made the record stand out so much the first time I heard it; it's not afraid to evolve in unexpected ways.  Do you find it easy to agree as a band when a song is finished, or is there a temptation to keep adding new ideas?

We are quite good, as a band, at knowing when a track is finished, but that isn’t to say that it can’t change before, or during recording.  Sometimes, those previously mentioned “happy accidents” make their way into the finished article of their own accord.  So, it’s so much a temptation to add new ideas as making room for anything that might emerge naturally.

It usually happens in one of two ways.  One of us will have a riff or phrase that they will bring to practice and then we jam it out to see where it leads.  Alternatively, we jam together and we’ll hit on something and try to reverse engineer that improvised section to recapture that moment and write it into something.  A lot tends to build on its own as we progress with a track but, I think it’s about being open to trying just about anything. 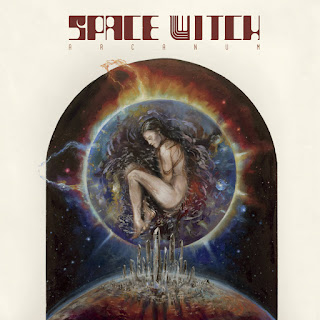 The cover art is really distinctive and well suited to the music.  In terms of the whole package, it lends itself well to vinyl and the experience of owning a whole piece of work.  Where did the idea for the design come from?

With the first record, Daz wanted to tell the story of Space Witch up to that point. The artwork done for the self-titled release by Alan O’Neil really captures that.  So, with Arcanum, we wanted to carry on that same process and explain where we were up to as a band.  The Witch at the centre of Sun has been through a lot over the decade of her existence so, we thought it was time for her Rebirth and it felt right with change in musical direction.  Adam Burke of Nightjar Illustrations created the piece and it was a pleasure to work with him.

You mentioned earlier you are working with Planet Of Doom on a feature film; what can you tell us about that?

We were contacted by David Paul Seymour and jumped at the opportunity when asked.  It’s an ambitious, animated, revenge tale featuring music by the likes of Elephant Tree, Summoner and Slomatics and a roster of incredible artists.  It is an honour, for us, to be working with everyone that’s involved in the project and it’s been a refreshing experience to write something for film.  There’s no release date but Tim Granda, the lead animator, is shooting for the end of 2018.  We wish him the best of luck and can’t wait to see the finished product.

Yeah there's some great recommendations there, thank you!  Do you have any tour dates booked for 2018?

We’ve got a couple of gigs on the horizon but nothing set in stone as of yet.  We’ve started to work on ideas for the next record and we’re currently jamming and playing around with them.  But there’ll definitely be much more riffs, grooves and witchery next year.

Thanks again for Catching up Peter, looking forward to hearing more from you and the band in 2018.