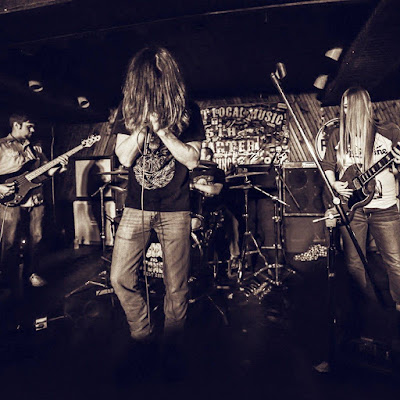 Hi Bailey! Its great to catch up with you; how’s things with Youngblood Supercult?

Hey guys! Things are a bit slow at the moment; we have been on hiatus for a while in anticipation of my next (and hopefully final) hand surgery.  After our break, we plan on coming back bigger and better than ever.

There have been both good and bad moments for us this year. The reception of The Great American Death Rattle; getting to play Psycho Las Vegas; tour the Southwest and meet some incredible people in the process; its has been surreal.  We had some amazing experiences on the road and can't wait to get out there again.  On the flip side of the coin, its pretty common knowledge by now that I accidentally shot a hole through my fretting hand, this past May, resulting in a broken metacarpal. I have had a lot of surgeries and physical therapy to try to get things back to normal. It has been pretty rough on me emotionally, not being able to play like I could before, but I'm getting better.  We also had some disagreements concerning the mixing/mastering of the album, and that dampened our spirits a little bit, but it has been mostly resolved at this point. We can only look towards the future and use these experiences as learning and writing tools.

Wow, that sounds like a really tough time!  Good to hear things with your hand are getting better.
How do you get past disagreements when it comes to the production and sound of a record? It must be reassuring that whatever choices were made have worked, TGADR has been extremely well received pretty much universally, in fact for me the hit was instant; I was hooked on play one.

We take a democratic approach to everything, but certain things always tend to be fairly emotional, especially when working with friends. Three of us were unsure of how the direction the original mastering was going, so we decided to take a different route. To be fair, we probably over-thought things a bit too much, frankly because of the pressure of following up High Plains; the original sound production most likely could've worked just fine with time and tweaking. It's all a learning experience when you're DIY.

Tell me a little about the processes you go through as a band when you're recording.

All of our albums have been recorded by sound engineer friends in different spaces, the last two were done by our good friend Jon Pederzani. We have always had the privilege of borrowing vintage mics and equipment from Vern White and Sonny Heller, renowned sound engineers in the Topeka area, so that's a good plus! In the past, we have just gotten our gear set up, found a good solid weekend where we can record the main tracks and guitar overdubs, and then vocals and any other guitar work come after that. On TGADR, some of David's scratch tracks were so good that we kept them. You can notice a slight difference in tone from the use of the scratch vocal mic vs the main vocal mic if you pay attention. Recording outside a studio gives us the freedom to experiment a bit, but it has its drawbacks. Jon has a full-time job, so it was a matter of when he was free to get over there to work on different things. Aside from that, Brad and I had plenty of alcohol in the studio, and Weston and David had certain smoke-able goodies to keep them occupied, haha!

Haha! Do recreational studio activities afford you room for improvisation, or you are focused about what it is that needs to be recorded? It’s always interesting hearing if bands know when a song is completed or whether there’s a temptation to add more layers and continue its development.   Sometimes it's extremely tempting to change/add things.

We've done it in the past. However, as we begin to focus more on the compositional value of our new material, I think we will want to stick with things as they are instead of improvising in the studio. Time is money, unfortunately. But we never want that to negatively affect the creative flow of the music; in the end you have to go with your gut. I think we can all agree on our disgust of putting down something in a permanent media. There's no avoiding it, though!

What were you listening too whilst you recorded the album? Does that ever influence your sound?

We all listen to a plethora of music.  Brad listens to a lot of country western, rap, synth, different kinds of rock. Weston likes everything, but I mostly hear him listening to blues rock when we're together. David also listens to just about everything. And I'm pretty much the same, lots of classic rock, folk, heavy metal, and bands from our stoner/psych genre. We try to support a lot of those groups and spread the love. So as far as what we listened to during recording was the same old stuff we always listen to. I tried to listen to a lot of Fleetwood Mac to channel that vibe, and I think Weston was listening to some Ape Machine at times. Keef Mountain and BUS were also on the stereo. The music itself doesn't influence our sound per se, but the heavy atmospheric vibe of some of those musicians definitely creeps in there. 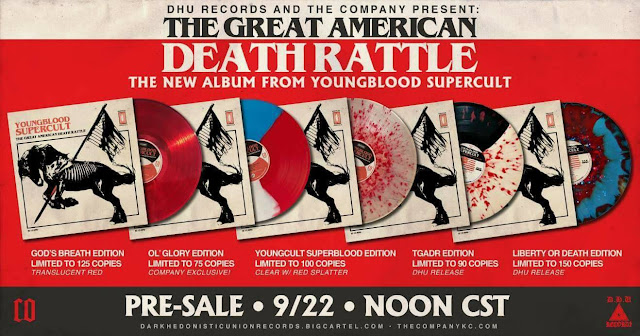 Now that the record has been released, do you start thinking
about writing the next one? How do you look at writing music together as a band?

We are definitely ready to start writing the next album. I think we have enough subconscious frustrations about the events of the past year (I know I do) to fill a couple albums. It's going to be heavier that our last albums, but we always want to stay true to ourselves and our "sound," which always seems to have a folk/blues element to it. I generally keep a Word doc full of lyrics and when we jam out tunes that we all seem to agree on and find lyrics that will fit nicely with a good melody, it usually evolves into a song, with some tweaking here and there. Although we are looking to do things in a more collaborative and organic way this time around.

I can't speak for the guy's; they're not here. I know Weston is a fan of about every stoner rock band that comes through our area and goes to as many shows as he can. I think Sasquatch killed it with Manoeuvres, Ruby the Hatchet with Planetary Space Child, Kadavar with Rough Times, and The Midnight Ghost Train with Cypress Ave. And we will always make an effort to support our label mates on DHU Records and The Company, so if you haven't checked them out, please do. There are a lot of local bands in the Topeka, Lawrence, and KC area that are wildly underexposed; Keef Mountain, Merlin, Inner Altar, Custom Black, Hyborian, Godzillionaire, Gnarly Davidson, Stone Grower, and many, many more that are ALL worth checking out.

There’s a lot there to check out! I think it’s fair to say DHU Records have an eye/ear for great bands especially newer acts; It’s been interesting to hear their output this year.

I agree! And I can't stress enough for everyone to keep an eye on The Company's next releases as well.

Yeah definitely! Thanks for speaking to me today Bailey, it’s been great to hear from you, happy new year good luck in 2018!

Thanks, John! I appreciate you taking the time to speak with me. Wish all the best for you in 2018!