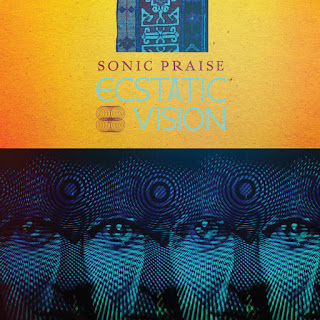 This might be one you missed last year but was one of my favourite records of 2015.  Ecstatic Vision formed a couple of years ago in Philadelphia and are already making a name for themselves as a live behemoth touring with the likes of Uncle Acid Acid and the Deadbeats and Enslaved.

Clocking in at just under 40 minutes, Sonic Praise is special, a reminder of all of the best parts of Sabbaths Vol 4, of the greatest of Hawkwinds spaced-out heaviest Jams and the influences of bands like Aphrodites Child. Journey kicks off the album and stomps its way forward over a massive gravelly riff and vocal combination that sets the tone perfectly for whats  left to come. Which brings us to Astral plane, 12 magnificent minutes of the finest Heavy Psychedelic Rock to barrage through my speakers in 2015. The 4 minute build up of clapping drum sounds and huge bass build that lead to the fantastic guitars and groove that drive the track right the way through to the screaming ( yes, screaming ! ) saxophone. Its a thrilling ride getting through to the end and final line of the track " take what you want lord just don't kill my vibe ", fair enough, right?! because thats exactly what they ask of you next.
Don't kill the vibe carries on the groove as the heaviest of the 5 songs and leads in nicely to the title track of the album, Sonic Praise is like a dopefuelled trek through a fuzzed out planet of forests and smoke.  Album closer Cross the Divide comes in at just under 10 minutes and is great blend of tribal drumming and hazey grooves, a sonic sound worthy indeed of praise.
This record ( on beautiful orange and blue swirl vinyl ) has had repeated plays since its release in the summer of 2015, its blend of great Heavy Psychedelia and Krautrock influenced Stoner sounds is the perfect trip, one ( Judging by clips on YouTube ) thats expertly replicated live, so the sooner they hit the UK the better.