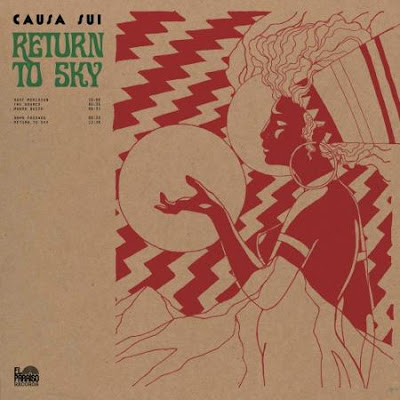 My introduction to Danish band Causa Sui came in the form of 2013's 'Euporie Tide'; an amazing instrumental psychedelic rock album, rich with ideas and sounds. An album that demands to be played loud!

Over the last couple of years, I've been able to delve deeper into their hugely impressive back catalogue and uncover even more gems. I was  happy to discover a new Lp being released for 2016.
'Return to sky' doesn't feel so much as a follow up to 'Euporie Tide' but more of a progression. The album starts with 'Dust Meridian', Jakob Skøtt's drums lead the way over the bass lines groove. At the halfway mark, the sixties tinted keyboards move into something far heavier until a wall of noise gives way to more mellow tones from the guitars.  The second track 'The Source' is riff driven and one of the best slabs of HeavyPsych I've heard so far this year. 'Mondo Buzzo' follows in a more measured way until it it begins to become full, heavy and fuzzy. The track becomes much more of a stoner rock monster and then following the Causa Sui way, the track finally mellows.
'Dawn passage has a psych-jazz feel that transforms into something more cosmic.  The title track closes the album; like the previous tracks 'Return to Sky'; it starts from one style and moves to something far heavier.  By the time we're 3 minutes in, the track is a pounding monster and without warning becomes a dreamy haze of synths, guitars and drum crashes. It's probably worth noting that just like the  previous releases, its almost unfair to break the album into parts because its strength lies in way it works as one whole piece.


'Return to Sky' is an impressive addition to a brilliant catalogue of tripped out Psychedelic rock. Akin to the albums before; this one manages to be unique and individual whilst remaining distinctly a Causa Sui album. if you're unfamiliar with the band; this really is an excellent starting point.