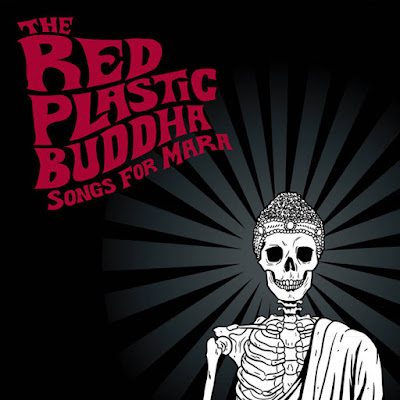 The Red Plastic Buddha of Chicago, Illinois have been around for about a decade.'Songs For Mara' is their latest album and fans of Sixties infused psychedelic pop that are unfamiliar with the band are going to find plenty to enjoy.

Opener 'She's an Alien' pulsates, feeds-back and then kicks in, sounding part sixties pop and modern rock simultaneously; it's a style that resinates throughout the album, and it's a catchy song too!
'Little White Pills' is a well paced Psych Rocker with splashes of indie rock from the last decade and a spaced out vibe too.  To follow, the more mellow track 'Being Human' which has a kind  of Anton Newcombe / BJM feel to it;  helped along with the sound of a flute.
Elsewhere there's more great rock tracks like 'Trip Inside this House' and the excellent 70s Prog of 'Cosmonaut'. In the midst of the record comes a great suprise in the form of a cover of 'A House is Not A Motel' by Love.  This version is fuzzy and harder than the original version; the pounding drums give the song a sense of urgency whilst continuing to treat the original with respect.
Closing track 'Stuck on You' has another 70s rock feel and promises that when singer Tim Feruson comes back from the dead he "won't work no 9-5" and assures us that his girlfriend loves him for his brains; fair enough!
What makes this album work well is the contempary feel to a really retro style of sound.  An obvious love for melodic pop within these songs shines through, making it clear that band are having fun playing them.
There's a link to the first track off the album below. I recommend you have a listen and then check them out on Bandcamp; good stuff!

Buy Songs for Mara on Bandcamp