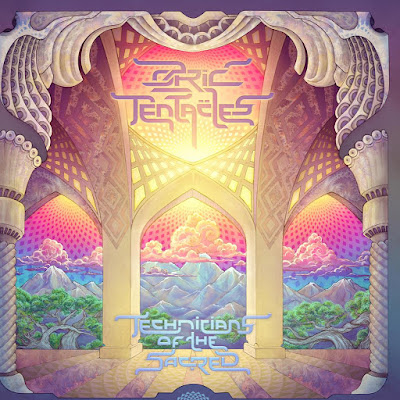 I'm not sure where time went.  Ozric Tentacles released their 15th album last year and I missed out on it.  It wasn't until a passing comment by a good friend of the RadioShow Jonathan Morgan mentioned that he'd really dug listening to it that a grabbed a copy.
I'm no stranger to the band, the 3 album run of 'Pungent Effulgent', 'Erpland' and 'Strangeitude' In the early 90's were the perfect companions to The Orb and Pink Floyd records I was listening to, having being introduced to the band at legendary Birmingham pub 'The Ship Ashore's' regular Psych night.
It pleases me to say that the bands 15th album finds them in fine form. 'Technicians of the Sacred' plays out over 2 discs and within seconds of ' The High Pass' you know you're in for something special. The Space rock jams are still entact, synths and lasers fire off in all directions as the song relentlessly progresses. Ed Wynne's distinctive lead guitar burns throughout the rhythm. Each of the two discs play as a continuum. The end of each song isn't always obvious, despite its evolving styles of electronic psychedelia or the bubbling skank of a track like 'Changa Masala'. There are reminders of past releases particularly on 'Epiphiloy' and 'Zenlike Creature' which took me right back to the days of tracks like 'Sploosh!' and 'White Rhino Tea'.
The second disc appears to have more laid back songs like 'Smiling Potion' and 'Rubbing Shoulders With the Absolute' but maintains that distinctive electronic SpaceRock sound of the album as a whole.
In terms of style, there's no doubt that it's progressive and psychedelic whilst indulging in soulful tones and space jazz noodlings.  All of these elements  enhance the album as a whole piece. I'm truly happy that i was alerted to the release of this album; Ozric Tentacles have managed that difficult task of achieving longevity without compromising the content of the music.