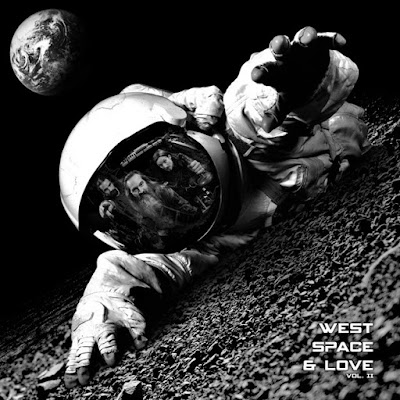 Late 2015, and 7 years since their debut; West Space & Love reconvened to lay down some more, often improvised, tracks to form the basis of Vol II. This second experiential journey into Psych and Spacerock, drones with a very distinct Eastern flavour. The album was recorded in Stockholm and features 2 members of Siena Root (Billy"Love" Forsberg and KG Westberg) with Dr Space of Øresund Space Collective fame. The trio also draft in special guest musicians, to add extra textures.

'Floyds Dream' is a beautiful opener and as cinematic as its Tangerine Dream inspired name suggests.  Unfolding gently, over 11 minutes, the track incorporates sci fi electronic synths and sounds with a guitar style; akin to early seventies Meddle era Pink Floyd.
'Khan Paan' displays some brilliant sounds of the sitar, over a trippy drum pattern; the violin is introduced as the track moves on, adding a new dimension. Things become more experimental, in terms of the sounds of the synths, with '2002' as music swirls around a simple motor beat before the album returns, once more, to those eastern influences on 'Oscillations in D Minor'. The drums that kick in, at the halfway point, offer a stoned, slow paced beat; once more, revealing it's early seventies tones.
The album closes with 'Time Compression', another Eastern infused track with it's roots firmly placed on the Dark Side of the Moon.  There's a cohesive thread throughout the LP as a whole and despite a peculiar tangent on 'Pig in Space' (which admirably breaks into a killer beat); the album works as one piece, weaving it's way to its conclusion, with familiar styles and sounds, becoming one brand new entity.


As experimental as the record may be, it certainly doesn't show in its delivery.  There's plenty of focus, with much to enjoy and admire about the project, especially the sitar work by Siena Root's KG Westman, this is the far out trip you would expect from the players involved. In addition, there are some really well thought out immersive pieces; in particular,  opening track; Floyd's Dream.
I'll be looking forward to experiencing further adventures from the cosmic travels of West, Space & Love, hopefully they won't leave it another seven years for Vol III.

The albums out now on Space Rock Productions and available on CD as well as Black, White or Clear Vinyl.