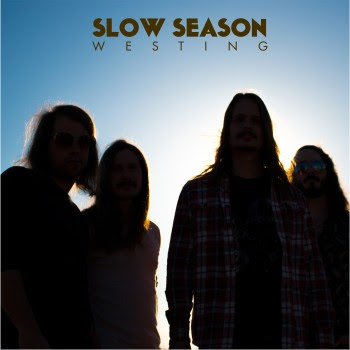 Just in time to light up your summer, Californian rockers Slow Season return with their 3rd full length 'Westing' out on Riding Easy Records this month, a label that also boasts the Riff-Heavy Monolord and Salem’s Pot as well as the brilliant 70’s rock compilations ‘Brown Acid’.


Opening to the wonky riffage of ’Y’Wanna', the record immediately pulls into gear and brings forth a bouncing slab of fuzzy grooved rock, Hayden Doyel’s bass noticeably injects the track with a little something extra, this is exactly how all great records should start. ‘Flag’ follows suit with nice heavy guitar work over pounding drum beats, for those unfamiliar with the band, it’s the first time on this record that Slow Season’s biggest influences become clear.
Those that still pine for the late great John Bonham can rejoice, drummer Cody Tarbell spends a large part of this record playing with the same style and panache as Bonzo but also manages to pull off that brilliant trick of making his sound contemporary and his own. ‘Damascus’ is a heavy psych rock piece, the great guitar work that dominates the LP from Daniel Rice and David Kent is never more evident than on this track and the follow on ‘Miranda’.
Elsewhere the album offers blues rock on ‘The Jackal’ and the slow stomp of Saurekönig, but its album closer ‘Rainmaker’ that steals the show; taking everything you’ve heard previously and mixing it together into one great big mammoth Stoner rock track complete with total freak out solo and uncanny Robert Plantesque vocals. The band have put so much of their own stamp on this sound and given that they’ve produced, engineered and mixed the album themselves they clearly know exactly what they’re doing.

And so the album resides somewhere between the West Coast and the West Midlands, there’s a great feel throughout the album for hard Californian 70s rock, but there’s no escaping the sounds of Zeppelin, not that it matters. This is a record that’s going to have a broad appeal, from Psych-heads to Stoners and to those that like great heavy sounding RocknRoll. It works incredibly well too, the albums an immediate hit and just adds to their continuing run of solid album releases, if you’re unfamiliar with “Mountains” and the brilliant self-titled debut from 2012, you need to get on them.