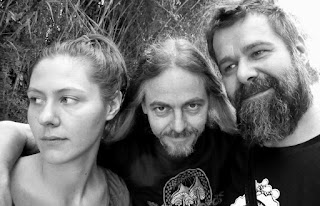 Originally released in 2011 to great acclaim, the music is intense and rhythmic and unveils itself over 5 wonderful tracks and 80 minutes. The idea behind this release was to look at combining music with visual art. The artwork included in this reissue are brilliant charcoal paintings by Ulla Papel aka Ulrich Mahn, The visuals are a perfect accompaniment to the sound of Electric Moon.
Sulatron are releasing the jewelcase edition with an 8 page booklet, the cover design was made by Lulu Artwork and is based on the trippy paintngs made by Ulla Papel. Recorded, mixed and produced by Sula Bassana and mastered by Eroc. The Doomsday Machine is another solid release by Electric moon and worthy of every Psychtrippers attention, click the link below to stream the album, theres a clickable link to purchase from Sulatron Records too, Dig It !