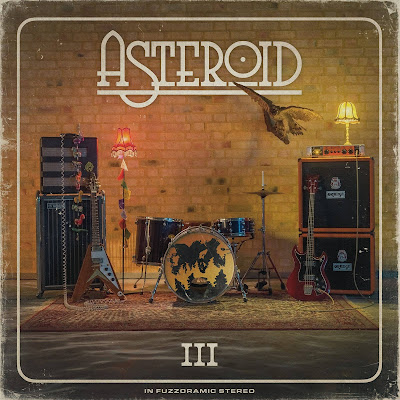 As 2016 comes to a close, it's fair to say that it's been a great year for new music. However, what is unusual, is that this year, in particular, the exciting new releases show no sign of slowing down. A wealth of accomplished new LP's are due for release in November.
In particular, III; the brand new album from Örebro's heavy, psychedelic rockers Asteroid, stands right out there.

The last release from the band was, unbelievably, in 2009, when the band released the highly acclaimed 'II'.  Fans of Asteroid will know that they have an incredible live reputation and continue to thrive as heavy touring trio.
Following extensive time on the road, the band went into hiatus in 2013, and now (thankfully!) they're back.

The record opens with 'Pale Moon'; a confident rocker that unravels itself over a bounding bass line and some nifty psychedelic slide guitar.  When the vocals kick in, with a 70's rock feel, the song really opens up.  'Last Days' confidently bounds on in similar tones, but has a more psyched-up, trippy feel to it, within the riffs and rhythmic beating of the drums.  Follow on track 'Til Dawn' is a stoner boogie, and much more in keeping with the feel of past albums; it's got a killer, fuzzed out riff too!

Next up, is the standout song for me.  'Wolf & Snake'; a monster of a track, races along, over its grooving beats and bass like, QOTSA's dirtier cousin, whilst the shredding of the guitar leads to one massive stomping doom laden finale.

'Silver & Gold' offers a more spiritual layer to the feel of the record over guitar work that nods its head gently towards mid 70's Page or Gilmour. 'Them Calling' is a solid nuts and bolts, mid tempo stoner rock piece; a heavy stomp that you know could threaten to bring a building down whenever it's played live. The album concludes with 'Mr Strange', another cosmic rocker with some fantastic guitar work and more nods to Zeppelin and Page; the feel remains consistent with the rest of the album and it's a perfect track to close on.

Asteroid have delivered a striking and predominantly heavy record; the songs within aren't just written, they're crafted and developed in such a way that its almost impossible to forget them. There's a vintage rock feel within the contemporary style of heavy, psychedelic rock.  The band have retained their distinctive identity.  You get the sense that these tracks have been built to take to the road; something that the band have already made sure of.  A huge European tour has already been announced. This is a brilliant record that deserves to be sought out and heard. Also, check them out on tour.