Atom Heart Mutha...Albums of the Year 2016. The Spacelords - Liquid Sun


Here's another LP that came out in the early part of the year and has stayed with me ever since.  The Spacelords are a German trio with a reputation for translating their massive live sound into their brilliant studio recordings.  Coming in at 43 minutes and only 3 tracks long, Liquid Sun is a mammoth record.  The riffs are heavy; the vibe is trippy and band are on brilliant form.  This is how Heavy Psychedelic Stoner Spacerock is done! 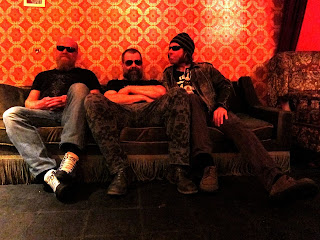 Good to hear from you Marcus; how has this year been for The Spacelords?

2016 has been (and still is) a very good year for the Spacelords!  We've played many festival and club gigs this year and met a lot of new fans and friends.  Our album 'Liquid Sun' sold very well. The 3rd edition was released recently; we're now working on a new album as well.

Sounds like a busy year? What can you tell me about the process of writing and recording Liquid Sun?

Normally Hazi comes up with some nice guitar melodies, we go jamming around these melodies and record them.  After listening to those recordings, we take the best parts of the jam and develop them further.  Mostly one idea bears another and so on; at the end we arrange the tune and practice it until it's ready to record in the studio.

Great to hear it's on its third issue already; how long have you been with Tonzonen Records?

Tonzonen Records had released the second edition of the 'Synapse' album, in Spring 2015.  It was actually originally released by Sulatron records.  It sold very well and they wanted to continue with us; we also feel very comfortable with Tonzonen.

The album is 3 tracks long; Black Hole is 22 minutes long.  How do you go about writing a song of that length?

We didn't plan to write a 22min song. It happened that we had so many ideas following the basic melody and at the end it was that long! We were surprised ourselves because it felt like it was 6 or 8 minutes when playing.  Even when we play it live people feel the same, they never think this song is 22minutes long!

Yeah, I agree it really doesn't feel that long on the LP too.   Your social media shows that you're touring a lot, do you play much outside of Germany?

We have toured outside of Germany, but not too much yet.  We are thinking of touring the UK next year.

Thats great news!  How far in to the new album are you and what can you tell us about it?

One track of of the new album has already been recorded, the other tracks are almost ready. We plan to go in the studio end of January.

What have you been listening to whilst preparing the new record?

All 3 of us are deeply into music and there's a wide range of music styles that we like; mostly we love psychedelic music and garage-rock, kraut-rock and so on.  We don't think that our listening behaviour has anything to do with what we compose.  The ideas just pop up in our heads as we play!  We believe this is a good thing, cos we don't want to sound like anyone else, of course!

Do you have any favourite albums from 2016 and are there any bands to look out for in 2017?

Yeah, there are many, for example, the album 'Stockholm Marathon' from Kungens Män.  We had a small tour with them in September this year.  Nice band, great music and loads of fun!
We dig bands like Giöbia, Vibravoid, Papir, Yuri Gargarin, Earthless, Causa Sui, Electric Moon...we could go on, there's just too many good bands out there!

I've really enjoyed a lot of those records too, especially the Causa Sui and Kungens Män albums; it’d be great to see them and Liquid Sun reach wider audiences.

Thank you Geoff, that would be really great. And thanks for your support! We very much appreciate people like you, you're doing great work.


Thanks for catching up Marcus and send my best wishes to the band! Happy new year!

And to you too ! We're going to perform our new songs live tomorrow, and the day after, as a last test.  After a few more rehearsals we'll be ready to record them; we promise a pleasant flight with the new album!