JuJu is the latest incarnation of Sicily-based Gioele Valenti. Lay Llamas, Herself, used to designate objects, such as amulets, and spells used ceremoniously in West Africa.  Valenti broadens the scope of ‘juju’ to encompass a mix of rhythmic psychedelia, ancient myths and Mediterranean neo-paganism. Through the music, JuJu tells the story of an on-going exodus from Africa that, more often than not, ends in ignored tragedies at sea; ‘a total defeat for humanity.’ Inspired by sources of Earth magic and soil secrets, JuJu strives to turn that defeat into a celebration of spirit and modern psychedelia.

I really couldn't explain what JuJu is, any better than that.  Released earlier this year on Sunrise Ocean Bender to widespread acclaim, this is an album that took on so much and delivered in spades.  If  anything deserves an accolade for the most original and unexpected record of the year; its this.
I was fortunate enough to meet Gioele this year in Manchester, sadly the meeting was cut short following some very sad news.  We reconnected recently to talk about how this year has been following the release of JuJu. 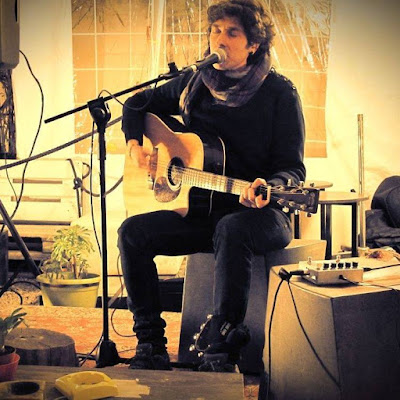 2016 has been very intense and rich of experiences.  JuJu's debut was out in May, and from that moment everything has gone very fast.  I put together a band;  I knew a lot of people who appreciated the project, and I've been witness of great changes in my own country.  The very sad moment, at the end of the tour, with Josefin Ohrn supporting Goat - I was in Manchester - I sadly lost my father, after a long sickness. Different opposite emotions.

You released JuJu quite early on this year, when did you start recording it?


I started JuJu's recordings in 2015.  In the beginning, just chaotic ideas, riffs and stuff like that... It was in June..., i was shocked, by images of people dying among waves, off the coasts of Sicily, it made an impression on me...Then all it became more systematic, and within July the concept of the disc was ready.   Five months later I finished the recordings, and in May 2016 was out.


There's a lot of different styles musically; was it a difficult album to record?

Yes, it s a sort of tribute to all marvellous music I grew up with.  It was a natural process, not so difficult to record... But it was quite hard to keep all those influences together, in a credible way.  To put in the same Ideal space, Bart Bacharach, Joy Division and Peter Kolosimo;  It's something strange to achieve.

It's certainly a unique record, I haven’t heard anything else like it this year.  Have you started writing again?

Thank you. Yes, I am currently working at new JuJu's album...


You’re signed to Sunrise Ocean Bender, they’ve had a really interesting output of late, how did you become involved with them?

Very simple, SOB was the first label I sent JuJu, they had very great bands, I really liked the esthetic of the site, and they appreciated the music so much, they said "that was damn good!".  A very traditional way to get involved!


How well has the JuJu album been received?

JuJu had a very incredible welcoming from journals, netzines and people! Everyone is enthusiastic, and it was something I didn t expect. I mean, I was conscious of the potential on it, but you know, I didn expect that the concept beneath it could interest so many people, and I am proud of the work.


The last time we met you were playing as part of Josefin Öhrn and The Liberation and Touring with Goat. How did you become involved with that tour?

The reason that I've been touring with Josefin and Goat, is due, in some sense, to the resonance of JuJu's debut.  Josefin and JuJu share the same love for music and art, and we started to follow each other on Twitter.  Then we listened to each other works, they liked my own so much, and we talked about a possible collaboration.  One month later, they invited me to join the band for the tour.  Shortly, we became friends.  The rest is history.


You've certainly been on the road a lot this year; what plans have you got for 2017?

I have planned a tour of Italy in February.  I am waiting for some dates in UK as well... and I'm currently working to the second album (as Herself, my folk side-project) with ex The Steppes John Fallon and his friends.  We'll see what happens.  2017 will see a new JuJu, that's for sure, and it'll be great!

I think its been a strong year for new music; what have you enjoyed listening to?

To tell the truth, I didn't have much time for listening to new tunes...But, I liked so much of the new stuff by Alcest (Kodama), Meshuggah (The Violent Sleep Of Reason) and the reissue of The Steppes (Drop Of The Creature)... as you can see, not strictly psych ;)...Oh! new Egone is also good!


It's great speaking with you again Gioele. Happy new year, Im really looking forward to hearing the next record.