Read the Atom Heart Mutha Review for The Judge HERE

Ripple music have had an incredible year, they seem to have found a bottomless well of Hard Riffing bands that truly know how to rock like Mthafcka's ! The Judge came out of nowhere for me, i'd somehow missed the original ep release, the debut however didn't pass me by and the second the first track 'The Witcher' kicked off, i knew i was in for something special. The band play a mean blend stoner psych with a defiant 70s rock edge and have a reputation as a formidable force live;  I caught up with Bass player Kevin Jones to find out how the bands year had been. 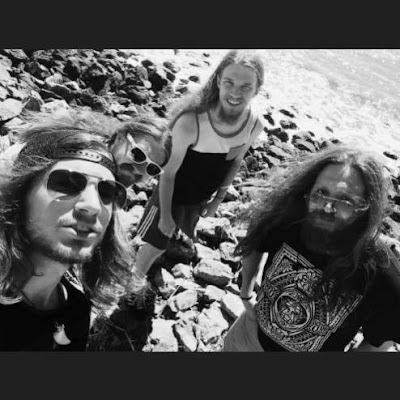 Really good! We finally put out our debut album that's been in the works for 5ish years and did our first tour ever!

That seems like long time to get a record out; were there hurdles?

We were just young.  No money. These past few years since we got Tyler, our singer, we really busted ass to get ourselves in the right gear to get it going.

I hear you have a follow up record ready to go; have you written this one from scratch?

Yes. We recorded it quite a while ago and had it pretty much ready going into the studio.


What can you tell me about the new album? Will it be different to the Debut?

To me, it's a lot more straight forward rock n roll.  We stepped out of our comfort zone a little bit.  It's a lot more in your face!  So far, we're thinking about an early 2017 release; nothing specific yet.

Your debut came out on Ripple.  How did you get involved with them?

We put an EP on bandcamp for free, and my guess would be somehow the news spread to California about us.  Todd got in contact with us with an offer to join Ripple and we couldn't resist.  We had to take it!

You have a reputation as a great live act; are there plans to tour outside of the States?

We've had invitations to play festivals overseas, but money seems to be the big thing keeping us from going.  Plane tickets aren't cheap.

Probably just stick around here.  Do more small tours in some of the bigger cities around us; Chicago, Kansas City, Indianapolis, Memphis, and so on.

Do you have any favourite albums from this year?

Red Fang just put out their Album "Only Ghosts" that I've been jamming to.   Wolfmothers newest album is in my current iPod rotation.

Are there any bands you recommend keeping an eye out for in 2017?

One band we played with on tour down in San Antonio, Texas was Smokey Mirror, those guys ripped, Thrashy doom metal.   It was mind blowing!  There's a band local to us named Spacetrucker. Super heavy riffage, they're kinda like Red Fangs little brother.
Oh! Let me throw one more album out there!  A band Called Nathaniel Rateliff and the Night Sweats. I love their new album!

Good Speaking to you Kevin!  Happy New Year to you all!