Svvamp's debut for RidingEasy Records was joy to listen to from the very first time.  They somehow managed to record a classic blues rock album and make it sound contemporary.   It's an album with a warm sound that demands repeat plays.  I caught up with the band to ask how 2016 had been for them... 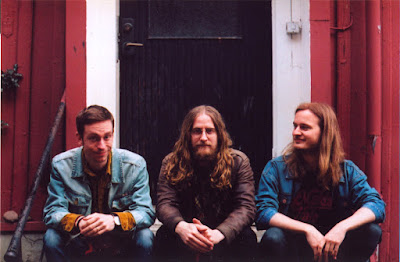 Hey! Thanks for speaking with me; how has 2016 been for you?

2016 has been great! We're really proud and happy to be a part of the RidingEasy crew.  We got a new family member in the band and we took a short break to focus on some new songs


RidingEasy have had a good year; they've put out some really interesting records.  How did you become involved with them?

A friend came to one of our shows in Stockholm and made a Snapchat-clip of us playing.  Later, she told us RidingEasy had picked it up and suddenly, we were talking on the phone.  It was pretty wild; we couldn't believe it at first!


When did you start recording the album?

We've been playing together for nearly 5 years now and have been making demos and recordings ever since.  The album really is a mix of places and time during a 2-3 year period.  We switched rehearsal rooms A LOT during the recording, that kind of dragged out the recording process, but we also took our time to really try out different recording techniques.


I'm reluctant to use the word "retro" but the albums' sound certainly has a vintage feel to it; these songs wouldn't be out of place on some of the great rock albums from the 70s.  Were you conscious of your influences whilst recording?

We definitely wanted to tribute our inspirations from that time on the album.  We recorded the album with very few overdubs and live on to tape; that way we captured the songs quickly and while they were still fresh.


Now that the record has been released, do you take it out on tour or do you start thinking about writing the next one?

We're taking a short break at the moment but we're hoping to take the album on the road next year. We're using this time to get some work done on our new songs and ideas.

How easy is it to tour outside of your home country?  A lot of the bands I’ve spoken to find hard to get out to tour overseas.

To tell the truth we haven't done any touring outside of Sweden... yet.  We'll see what the future has in store.

What have you been listening to this year? Any favourite records from 2016?

Pretty much every release from RidingEasy! Brant Bjorks "Tao of the devil", our buddies Maidavale "Tales of the wicked west" and probably some other great music we can't think of right now!

Nice talking to you and happy new year as well!