Three Great Projects You Can Check Out Right Now... 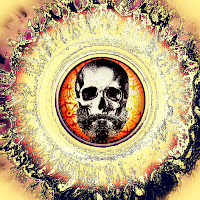 As 2017 progresses there's a huge amount of new releases around right now as well as really interesting albums well worth seeking out; some of those records will be reviewed soon on the Blog, I'll also be playing tracks from them in upcoming shows.
I'd like to draw your attention to some cool and interesting projects, most have just been released and are very worthy of your attention,
Ive included links and some information wherever possible as well as playable tracks and streams.  As always, if you like what you hear please show some love and purchase the music in whatever format suits and have a look at the artists and labels webpages and social media. 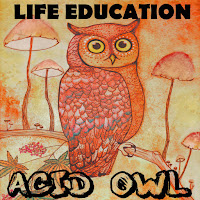 Acid Owl is a side-project of Kösmonaut due for release on limited edition cassette from Grabbing Clouds Records & Tapes out of the SF Bay Area, Released as two editions, the first 20 are hand-crafted and 80 are professionally duplicated on chrome. Described as  Circle-esque repetitive trances, conjured up by occasional Amon Duul II-esque Kraut gout flare-ups and relentless Reichel delayed guitar wave-gasms to massage your auditory holes.
The album itself is a magical trip, blending hypnotic electronica and beats with psychedelic soundscapes. Fans of cosmic exploration within the brain will find plenty to love here, there are  wonderful loops and drones from the ethereal 'Cosmic Claw' to the more intense 'PTSD'
Check out the video to 'Rainbow Terminus' Below and click the bandcamp player to hear more, you can preorder now and buy the whole thing on February 3rd. 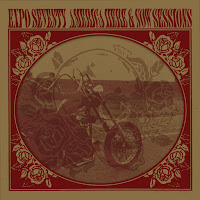 Expo Seventy return on Essence Music with the mastermind Justin Wright bringing together a rare line-up featuring two drummers. The four-piece only lived during a short period of time and the thunderous experiments achieved by these unique sonic hypnotists are fully presented here.
America Here & Now Sessions was recorded during the three-week art experience started in Kansas City featuring paintings, sculptures, poetry, plays, films and music from local and national artists called “America: Now And Here – A cross-country traveling dialogue about America through the arts”. Local musician Ashley Miller spearheaded a recording project that featured a handful of local acts to record some music that would be later edited together and released as an album.
The project lost funding, but Expo Seventy was able to record as part of the art experiment.
The album itself comprises of two long tracks 'First Movement' and 'Second Movement'.

'First Movement has a really nice hypnotic feel as it starts, somewhere between droning experimentation and borderline Spacerock; the beats slowly evolve and intertwine over cosmic sounds, theres something very early seventies Floyd going on too.
As it moves towards its conclusion the guitars have more fuzz tones and track subtly intensifies. 'Second Movement' is much more of a synth led piece that gently pulses it way forward, as it hits the halfway point it begins to introduce heavy mesmerising beats and crashes symbols and becomes something far more intense, its completely engaging and easy to get lost into it as evolves.

There are multiple versions available:
LP: Limited to 160 copies on BLACK vinyl (housed on RED packaging) and 140 copies on GOLD vinyl (housed on BROWN packaging). Stunning and sturdy hand-screenprinted die-cut packaging, including a fold-out poster/innersleeve and insert. 180g high-quality wax displaying visuals by Erik A. Hamline, aka Steady Co. CD: Sturdy tip-on mini-LP gatefold packaging displaying utterly different artwork from the vinyl edition. Design courtesy of Justin Wright himself. Includes an OBI strip and a bonus track. Limited to 200 copies. SPECIAL EDITION: Strictly limited art edition of 119 hand-numbered copies, which comes with: 1) The vinyl edition on an exclusive colour variant - WHITE wax (housed on BLUE pack); 2) A large hand-drawn/silkscreened fold-out poster; 3) The CD edition; 4) An exclusive bonus disc called “Beyond From Where We Started From”, with recent trio-mode Expo Seventy free jams of the highest order. Everything housed on a beautiful hand-stitched/silkscreened cloth bag. 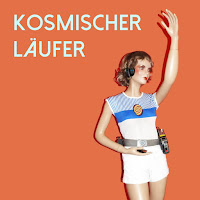 Finally, I'd like to mention Kosmischer Läufer's 3 Volume Project 'Secret Cosmic Music of the East German Olympic Program 72-83'. I hadn't heard of this before but came across it recently; it's fair to so I was completely blown away by it.
For the first time since it was recorded in East Berlin over 30 years ago the music of Martin Zeichnete can finally be heard. A disciple of the Kosmische Muzik of the likes of Kraftwerk, Can and Neu! he heard drifting across the Wall from the West, Martin's idea of using the motorik, hypnotic beat of krautrock in the training of athletes was taken and exploited by the DDR's state run Olympic Committee.
Unable to obtain a licence to play his own music Martin embarked on what he called a decade long 'invisible career' with East Germany's athletic elite his only audience. Mixing electronics with live instruments Martin produced an incredible range of work including music for warmups, running, 'ambient' music to be played in gyms and pieces for artistic gymnastics. The committee called this program State Plan 14.84L, Martin and his fellow musicians called it 'Projekt Kosmischer Läufer' (Cosmic Runner).

The albums have a wonderfully warm Spaced out feel to them, beautifully recorded as trippy synth symphonies the recording follow an athletes  journey as they build-up/warm-up and back down again.  Originally released in June 2013 they have been reissued again on 180g coloured vinyl and are highly collectable.