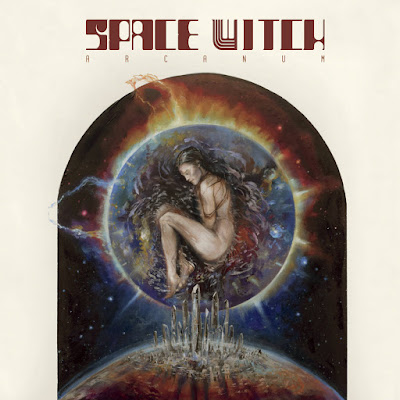 Formed in Stoke-on-Trent, England in 2007, Space Witch are a psychedelic stoner/doom band with  shades of 70's prog and heavy psychedelia.  2008 saw the release of their self-titled first demo; they then went on to gig extensively around the UK until the follow up to their demo 'Resurrection' was released in 2011.
Their critically acclaimed, self-titled, first full length (a double album) was unleashed as a joint venture with labels HeviSike Records, Fear Me Music and Orchestrated Dystopia Records in 2014; the band continued to spend time on the road, supporting well revered bands including Conan and Mars Red Sky.

The record kicks off with the epic, slow burning 'Cosmonoid'; beautifully evolving over 15 minutes, the track begins its ascent with cosmic swirling and a measured beat.  As the track hits the two thirds mark, it becomes a mammoth tornado of heavy, unforgiving guitar riffs and prog-like synth manoeuvres.  The track is led to its conclusion by the intense sounds of choral chanting.  'Astro Genocide' follows with deeper, stoner tropes; the riff is weighty and the percussion pounds ahead.  The song switches styles as poetic vocals deliver new tones before, once more, reminding you of just how heavy the band can get.  'Hex Solaris' follows, at first to the sounds of an orchestra tuning up, before returning to formidable heavy riffs and lyrics delivered by way of some sort of doom sermon (which is every bit as cool as it sounds!).  'Battle Hag' concludes the LP by way of tasty stoner vibes, sonic synths and astronomical space rock; the track itself is a showcase of just how versatile Space Witch have strived to make Arcanum sound.

It's fair to say I was sold on Arcanum on the first listen; the attention to detail within the music undoubtedly sets it apart from more recent doom/downtempo records.  Within the riffs are deep psychedelic grooves and spaced-out prog, which for me is why the record is such a satisfying, cosmic trip.  It is also deeply focused and very heavy.  I guess albums sometimes need to have definable track breaks, however the flow between the 4 tracks here makes it feel like one complete piece that should be consumed by the brain in one far out sitting.   It wouldn't be fair to label this record simply as a doom LP; Arcanum delivers something richer.  There is so much heavy psychedelic goodness here; this is something stoner and space heads will truly dig too.  Space Witch were new to me and this is unquestionably one of the best records I’ve heard this year.   I’ll be looking to see them live on the strength of this, as I’m sure playing the record at home is merely scratching the surface.