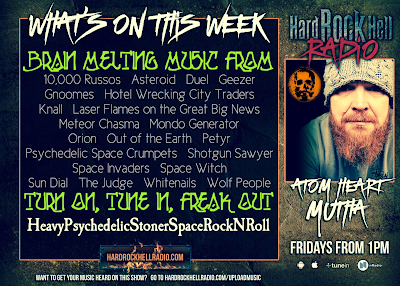 This weeks show for RADIO HRH features Brand new music from 10,000 Russos, Duel, Geezer, Laser Flames on the Great Big News, Meteor Chasma, Petyr, Space Witch and Whitenails.
There's also an early play of the brand new single from North California's Shotgun Sawyer which was produced by non other than Cody Tarbell from the mighty Slow Season. As if that wasn't Enough I will also be airing a studio session track from the brilliant Out of the Earth as they prepare to record their follow up 2014's killer self titled Lp.
Add to all of this music from Asteroid, Hotel Wrecking City Traders, The Judge, Knall and Space Invaders and you've got 2 hours of brain melting HeavyPsychedelicStonerSpaceRocknRoll.
You can hear the Show via the HRHR Webpage HERE, or the dedicated app for iOS and android. Contact me via AHM's FB, Twitter or email if you'd like to hear anything in particular.

If you would like to be considered for airplay on the show message me for details.