Atom Heart Mutha...Albums of the Year 2017. As Chosen by Viva El Swain. 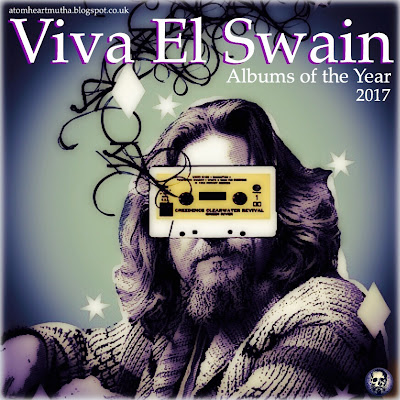 I've been very fortunate this year to have David 'Viva El' Swain join me  on the Atom Heart Mutha Blog as a reviewer and contributor. His ever expanding journey into Psych Rock and Stoner Vibes, as well as more recently the Australian desert rock scene is infectious, he's introduced me to some great music this year and it's very cool having him here at AHM.
I asked him recently what his favourite albums of the year were and this is his reply. He's also compiled an excellent mixtape of tracks from this year for you to hear, Dig It!
"I could compile a huge list of albums I’ve listened to this year but for an end of year top ten I have to go back to the ones I choose to play and play again. Starting with Siena Root and it’s jazz tinged journeys, King Gizzard sneaked in just recently with their fifth album in twelve months. I love the music from the desert wherever that might be so Endless Boogie nailed it with acid jams and a song about a kite fair in ‘74. Speaking of desert climates the recent influx of Australian psych rock bands caught my attention with superb albums from Psychedelic Porn Crumpets and Motherslug plus new band Planet of the 8s. Monstrous returns from Queens of the Stone Age and Monolord sure up the list that is topped by what I term as Stoner Jazz, the wonderful album by Colour Haze, who experiment with strings, brass and woodwind to create a huge sound.
Thanks 2017".