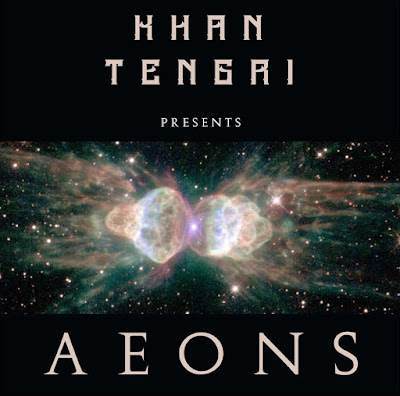 Khan Tengri is the latest project from  The Gateless Gate's Allister Thompson, its a psychedelic space rock album that he describes as a "rebranding" of his work.

The LP opens with a sonic interpretation of the classic HP Lovecraft story 'At the Mountain of Madness" broken into 5 parts. This atmospheric piece captures the horror story as a fearful trip, taking in spooky chants, pounding drums and some impressive guitar work, before drawing its conclusion in a textured cinematic fashion.
'Kalpas' is a mellow affair, led by guitar and spiritual chanting; it flows beautifully. 'Dualistic Stomp' is a heavier number and shows a different side to the record, as does the strange 'The Holocene Extinction'; both tracks have more pounding rock feel, the latter has a brilliant monstrous growl of a vocal that seems list extinct species and suggest that we as Homo Sapiens are next.
Throughout the record, there are many moments  that show the music has been heavily influenced by Pink Floyd, taking different elements of their vast career.  'Maitreya Has Come, And all is Renewed' could so easily be a David Gilmour solo track; it really is fantastic stuff. The Album closes with 'Silurian', an ambient cinematic piece that runs for 12 minutes which captivates and immerses you, as you listen on.
Aeons is a really cool listen; it works well as a space rock album but it also shines in its more ambient  parts. There's some striking guitar work and much to enjoy on an album that is equal parts chilling and dazzling.

I'd also recommend having a listen to some of Allister's early works under his Gateless Gate moniker; there's some really interesting things to discover.  A link to the band camp page can be found below; click on and listen.