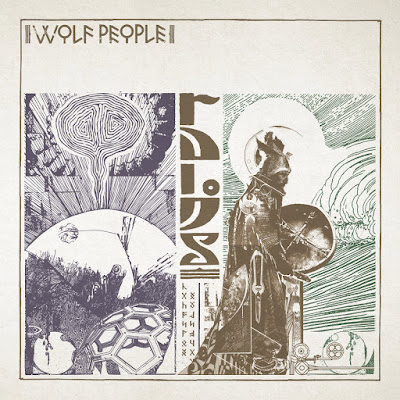 Wolf People are time travellers.  Their tools are mythology, history, hauntology, big riffs, bigger beats and electricity.  They've just made a welcome return with ‘Ruins’ their third LP, which is out now on Jagjauawar.
The record opens with a bluesy, rock fog of 'Ninth Night; a beat led track that confidently struts its way on to the harder rocking 'Rhino Sagas'.
Those familiar with past releases, especially the fantastic 'Steeple', will  undoubtably realise just how much heavier the band have become. By the time the solo kicks in on 'Night Witch' your ears will already be bleeding!

Without giving up the pace, the album continues to progress its 70's rock influenced way on tracks such as 'Thistles' and 'Crumbling Dais' before the driving grooves of 'Not Me Sir' burst in.
'Belong' and 'Salt Mills' slow the pace as the album begins to close. The Final track 'Glass' has a very British Sixties beat feel to it, whilst still managing to sound like modern day rock.
"Ruins" marks a progression from previous releases; their sound remains distinctive but, seems heavier, comparatively, whilst remaining incredibly tight.

There’s something very English about their style, musically and within its production; something thats been described as Medieval.  It's rustic for sure, yet remaining in keeping with traditional psychedelic rock, whilst not exactly retro.  There have been comparisons to Jethro Tull, but these will be more in the line with the instrumentation (flutes!), and not necessarily the songs structures. Although, there are undeniably, elements of Ian Anderson in the vocals.

"Ruins" is a confident recording; its strengths lie within the hooks; the lyrics and in the vocals of Jack Sharp.  The band themselves are on good form and this is a weighty step in the right direction in terms of the bands evolution from 2013’s ‘Fain’. The flow within the tracks make the record work much better as whole, despite individually the songs standing up for themselves.  2016 is coming to a close and the quality of music being released seems to get better and better.
"Ruins" is an album that will reward the listener with every play. Also serving as a promise of greater music to come from the band; this is recommended. Play it loud; very, very, loud!