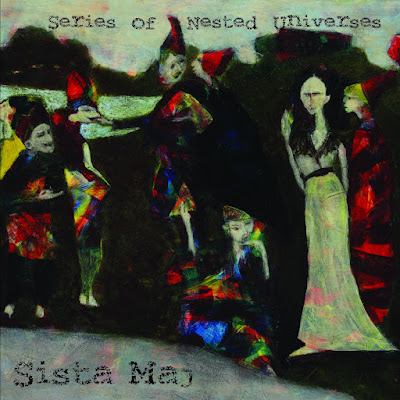 The Trio 'Sista Maj' (Swedish for the last day of May, ever) are an interesting prospect; made up of Jonathan Segal of Camper Van Beetoven, drummer Andreas Axelssson (experimental jazz artist Lisa Ullén's band) and Mikael Tuominen of the brilliant Kungens Män.
The last day of May 2015 happened to be the first time that these three musicians played together.  Record Label Space Rock Productions explain "they had played in other constellations before, but this started a new group: Sista Maj".

Disc 1 begins with the ambient and jazz infused 'Penny Spies', acting as an intro to the album, over its 6 and a half minutes leading to 'Secret Cave Secret Rat' a psychedelic mantra building over guitar and drones. 'A Very Happy Feather' is a colossal 25 minutes long.  It begins its ascent with improvised space rock jamming, before it evolves into a full-on krautrock workout; its motorik drumming is almost hypnotic.

Disc 2 commences with the title track 'Series of Nested Universes',  another ambient piece built over drones and a steady beat; its tone is cinematic and there are tinges of Eastern Psychedelic violin  hidden within synthetic soundscape.  'Like a Diamond in this Guy' follows as slow psych jam over a considered beat and galactic guitar, but has a dark intensity.  'It Never Ends' is fast paced, urgent and strange; it's also infectiously groove driven and, easily, my favourite track on the album.  The record closes over 15 minutes of improvised, atmospheric psychedelia and jazz with 'Bones of Steel'.  It's mellow tones enriched, once again, by the eastern styles of the violin and guitars, otherworldly and beautiful.

Series of Nested Universes is a massive album to absorb over its two discs.  Whilst its inception and indeed the recording process is born of improvisation and jamming sessions; strangely its content doesn't feel particularly loose.  Given the bands pedigree, it's no surprise that stylistically, it takes in jazzed-up space rock and psychedelia.  However, it doesn't follow conventional rules; each track is its own being and, as a listener, you'll benefit from repeated plays of the album.

Space Rock Productions are releasing the 2CD set limited to 500 pressed, making this a collectable piece. Find it whilst you still can!